Last fall I got together with my friends Noah and Alex at Noah's place to brew a big, dark saison seasoned with blackened raisins, rosemary, and orange peel. The base beer turned out alright, but the funky portion to which we had added the dregs from various sour beers turned out fantastic, a blend of earthy funk and dark herbal complexity. It turned out so well in fact that this year we decided to brew a 15 gallon batch of dark saison, and sour the whole thing.

While the basic concept of the beer remained consistent the recipe itself went through some big changes in regards to the malt, yeast, and spices. Noah's brew system had also gone through some changes, making it now approximately four times more complex than mine (no I'm not really clear what that box does either). 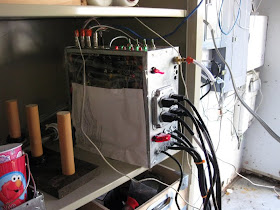 The malt bill was overhauled, making it much more complex this time around (not my idea) but for something funky I don't mind some extra complexity (and unfermentables) from the additional crystal and dark malts. 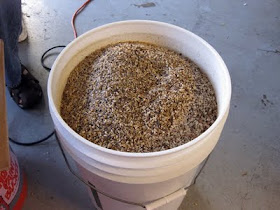 We got some extra fermentables from caramelized dates instead of the raisins we used last year. We deglazed them with a bit of the final runnings which we boiled down to a thick syrup, along with a cup of red wine. They were then pureed with a stick blender and added this paste right at the end of the boil. 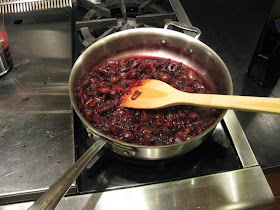 We didn't get great efficiency because the boil kettle size limited us to collecting only 12 gallons of wort. As a result we added light dry malt extract so we could get a full 15 gallons of 1.078 wort out of Noah's keggle system after topping off with water post-boil. 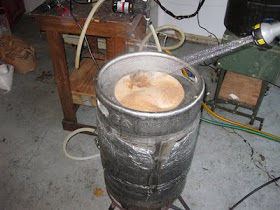 This time around we replaced the rosemary with black cardamom, an African cousin of the more common green/white variety. It has a darker more complex flavor (notes of smoke and creosote), and is most often used in African and Indian cooking. We erred on the side of caution going with just 3 g of the crushed inner seeds added with 2 minutes left in the boil. We had also intended to add the zest from an orange as we did last year, but between the activities of brew days and the microbial harvesting we forgot to add it. 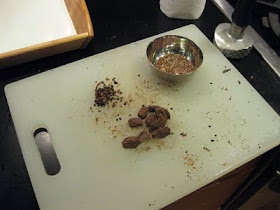 The yeast changed from one Wyeast VSS saison strain to another when we replaced the 3725 Bier de Garde with 3711 French Saison. The yeast cake for the 15 gallon batch came from the Hoppy French Saison I had brewed a few weeks earlier. The bugs came from a variety of sour beers, both commercial and homemade that we sampled during the brew.

At least we kept the hops pretty much the same going with 2 oz of Amarillo to bitter. 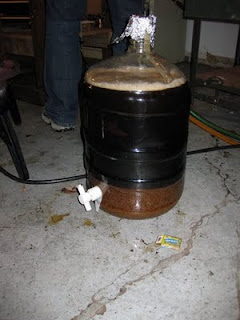 With the mash finished Alex vacuumed out the spent grain using a shop vac, seemed like a good way to get rid of that large a mass of wet grain if your mash tun is too heavy to lift. 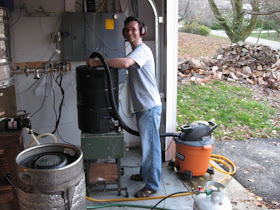 Seems like this is becoming a yearly tradition, hopefully this batch lives up to its predecessor.

3 grams of black cardamom (inner part of seeds ground) added with 2 minutes left in the boil.

Dates caramelized in pan, deglazed with 1 cup of red wine, and then 5 cups of first runnings that had been reduced to ~1.5.

Cooled to about 72. Pitched slurry from my Hoppy French Saison, plus the dregs of numerous homebrewed sours, as well as a Russian River Consecration and Jolly Pumpkin Bam Noir. Oxygenated with 60 seconds of pure O2.

Strong hard fermentation in my basement. Did not ramp the temperature up in an attempt to save some fermentables for the bugs. Soaking some Hungarian oak cubes in port to add when I transfer to secondary.

Alex added orange zest to his as well as wine soaked oak cubes. Noah is going with Grand Marnier soaked oak, it will be interesting to see how the batches differ.

12/9/10 After a year it is doing pretty well, with the cardamom is at about the right level. It is tart, but not sour with layers of complex savory flavors.

10/13/11 The Cabernet portion is terrific, more sourness than plain, and muted spice.
The Mad Fermentationist (Mike) at 11:20 AM