Imperial Stout is the beer that beer geek's love to geek out about most. The flavors are intense, complex, and often improve with age. While Reinheitsgebot approved (well except the unmalted roasted barley) Imperial stouts are out there, many of the most popular are dosed with ingredients that echo the roasted malt character, popular choices include coffee, chocolate, molasses, vanilla, dark candi syrup, and of course aging in decommissioned liquor barrels.

While there are numerous Imperial Stouts that I enjoy, one of my favorites is Breakfast Stout. Founders does a terrific job balancing the different components of their coffee and chocolate spiked Imperial oatmeal stout. It is also one of the few big stouts that is probably better fresh than aged (since both the coffee and hops diminish fairly quickly). After having a couple four packs over the last two months (this is its first year showing up in quantity in DC), I decided to brew a beer based on a BYO clone for the beer from a few months back. I put a bit of my own spin on the base beer (more complex dark malt bill, different bittering hops, Maris Otter instead of American 2-row) but for the most part stayed true to the recipe. 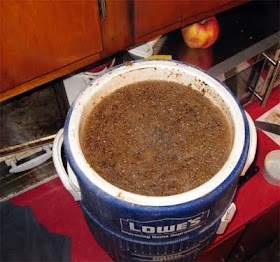 I brewed about 4.5 gallons hoping to have 4 left to rack after primary fermentation. The amount of malt required pushed my 5 gallon mash tun to the brink, even with a mash pretty close to 1 qrt of water per pound of grain. Now that I have the space I will probably put the finishing touches on a larger cooler mash-tun I built a few years back and only used once.

I added a bit of baking soda to the mash to keep the mash pH from falling too far due to the high percentage (13%) of dark grains/malts. The primary reason for doing this was to ensure the amylase enzymes do their work breaking down starches into sugars and dextrins, but I think it also helps the flavor of the finished beer. Dutch Process cocoa powder is treated to make it alkaline instead of acidic, which makes for a milder character that works well in baked goods. I think having suitably alkaline water helps to get rid of much of the harsh/acrid character that I hear people complain about when using roasted barley, and especially black patent. 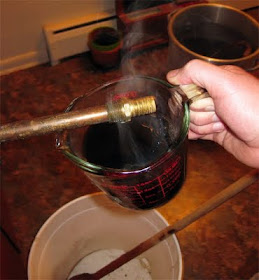 The first runnings certainly looked the part of a big, bad stout while I was vorlaufing. The beta-glucans in the oats add a nice viscosity to the beer without making it too sweet. If you really want a thick stout go for flaked rye which is even higher in beta-glucans than oats. 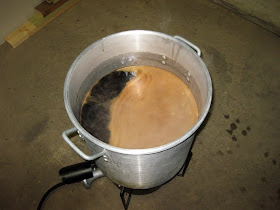 As I have done for a few beers in the past I am planning on splitting this one into several different secondaries to get multiple finished beers.

Founders makes a mythical variant of Breakfast Stout called Canadian Breakfast Stout which (in addition to be infused with coffee and chocolate) is aged in bourbon barrels that subsequently held maple syrup (some reports claim that the barrel was used to make Kentucky Breakfast Stout before the maple syrup). A few months back I took some heavy toast American oak cubes which had been sitting in Maker's Mark and moved them into a jar of grade B maple syrup. My plan is to add these cubes along with a healthy dose of the bourbony maple syrup to 1 gallon of this stout (the syrup itself tastes fantastic as it is, or as a glaze for pork loin).

For chocolate flavor I am going to use cocoa powder, mixed with a bit of hot water to form a paste (as I did for my Chocolate Pumpkin Porter last fall), added to secondary about 2 weeks before bottling. For coffee I like to use coarse cracked beans in secondary just a day or so before bottling. I find these two methods give me the best flavor without harshness or risk of the oils ruining the head. 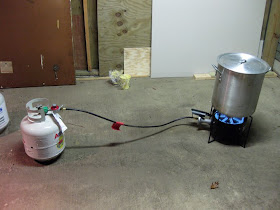 Cigar City Brewing is the most exciting brewery to open in Florida. I have tried several of their beers so far, including a cedar-aged IPA and a guava saison. None of them have been terrific, but both were interesting to experience. The idea of their Hunahpu’s Imperial Stout really struck me, an Imperial stout with chocolate, vanilla, cinnamon... and chile peppers. The combination of chiles and chocolate is a classic one, and it sounds like a good addition to a big rich beer like this one. I liked their idea of going for more chile flavor than heat so I went with dried anchos (unlike Great Divide which adds a hint of cayenne to their Chocolate Oak Aged Yeti), which I'll add cut up to the secondary. For the rest of the character I'll make a paste with the chocolate and cinnamon, and toss that along with a split vanilla bean into secondary.

The third flavor variant will be with cocoa and a vanilla bean (both in secondary for about two weeks). Should be a tasty dessert beer for the approaching cold winter. The final gallon will be left plain to see how the base beer stands on its own.

Here is a post with pictures and more details on adding the various flavorants.

Made a 3 qrt starter 28 hours in advance, strong start.

Added 3 grams of baking soda to the mash to get the pH up and mellow the dark malts. The pH at room temp ~5.4 after the addition of baking soda.

First 30 minutes of the boil were off and on as the propane tank seemed to be running low and lost the boil.

Cooled to 66. Strained. 90 seconds of pure O2. Pitched about half of the starter, other half for Tim's Black Pils.

11/16/09 Fermentation looks about complete, but I still haven't taken a gravity reading.

5/12/10 Tastings of Plain, Canadian, Mexican, and Mocha.  All tasty, but all over-carbonated.
The Mad Fermentationist (Mike) at 9:09 PM