At just over six months since brew day my second batch of Berliner Weisse is still pretty young by sour beer standards. The recipe I used was nearly identical to that of my first batch of Berliner Weisse, but I took half of this batch and added Cabernet juice to give it a twist.  Both halves of the batch turned out well, but the Cabernet juice didn't have as much of a flavor impact as I expected (and the impact it did have was not as bright and fresh as I had hoped).

Berliner Weisse isn't exactly my choice for winter drinking, so most of this batch will probably hang around my basement until next summer.  I may break out a bottle in a couple months to send to the National Homebrew Conference (NHC), I've been meaning to enter a couple beers to see how they fare.  As a result of its subdued flavor and potent acidity I will also blend some with other beers that need more sourness. 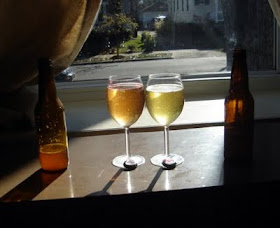 Appearance - The beer pictured on the left.  Clear straw yellow, not many beers on this side of Budweiser. A small white head forms, but quickly dissipates.  Glad to see the starchy haze has completely cleared up (or settled out).

Aroma - Clean lactic aroma with a slight wheatiness.  Not a complex aroma, but then that may come with some more age as the Brett from the bottle dregs continue to work.

Flavor - Bright, clean, with just a touch of wet hay from the Brett. Sour, but not quite as saliva gland punishing as the Cabernet laced half. The dry cereal character this beer had right after it was bottled has mostly faded, but there is still a hint of Cheerios.

Mouthfeel - Certainly thin, but no unpleasant dryness or tannic character. Nice assertive carbonation, but might be a slightly low for the style (which is what I was aiming for since I don't like aggressive carbonation).

Drinkability & Notes - I think it is just as good as my first batch. Still needs a few months, but it is almost there.  The acidity may mellow a bit as well as the Brett continues to work in the bottle, but it is very drinkable as is (assuming you don't mind sour).

Appearance - The beer pictured on the right. Clear light reddish-amber, no longer the beautiful pink it appeared in the fermenter. The same lackluster head featured in the straight version, between the acidity and the low gravity there isn't much hope for a great head on a Berliner Weisse.

Aroma - Similar sour aroma (ethyl lactate?) with just a hint of Concord grape juice. The grape character just does not have the volume or character I had hoped for.

Flavor - Forceful sourness up front, probably closer to commercial Gueuzes than the few Berliner Weisses still produced (I'm sure the acids and sugars in the juice contributed to the additional sourness). Not much grape character, but the flavor is just a bit deeper and sweeter than the plain.

Mouthfeel - A little bit fuller, and the carbonation is a lighter than in the other version.

Drinkability & Notes - Needs a better grape character, next time around I'll have to go with fresh/frozen fruit (that always seems to give me the best results). Still not a bad beer, but sadly that First Blush juice doesn't seem like a great idea for a beer this delicate.
The Mad Fermentationist (Mike) at 6:08 PM