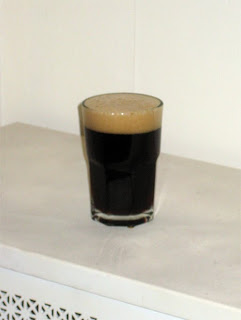 A smoked doppelsticke (mega-alt) was going to be the second beer aged in our bourbon barrel, but after the Wee Heavy went sour the batch I brewed became an orphan. I ended up bottling it in August after letting it age for a couple months in the carboy without oak (although a few bottle received maple syrup soaked oak cubes).

It was not what we set out to do, but this recipe ended up tasting closer to what I imagine the historical Adambier of Dortmund than my clone of Hair of the Dog's Adam did. That isn't too surprising as this beer was made from all German malts, and fermented with a German ale strain while the Adam clone relied more on ingredients from the England/Scotland. Both batches turned out well, each as a very different versions of the same concept of a lightly smoked malt bomb.

For more details on this batch check out the recipe post from a couple months back.

Appearance – Dark brown (brilliantly clear when held to the light), with some amber highlights instead of the red highlights that you usually see in a beer this color. Nice, thick, off-white head with great retention.

Smell – Some soft-mellow smoke notes mingle with some oak (despite the fact that this beer wasn't aged on oak). Toasty malt, although not as much bready munich malt contribution as I would have expected. As it warms up from cellar temp it does start to put out a clean ethanol presence, not too surprising in a big beer at about five months since brew day.

Taste – Nice balanced smoke character, with a rich maltiness. Moderate bitterness, just a little more than it takes to counter the malt sweetness (but not as much as I expected from the 50 IBUs). The yeast adds a nice fruitiness to the beer. The carafa and caramunich just fill in the range of maltiness without adding any perceivable coffee or caramel. Certainly complex enough, while still balanced (and much mellower than you would expect for over 9% abv). By the end of the glass I've gotten used to the smoke and hardly notice it.

Drinkability & Notes – Certainly could have been smokier, but it is in balance with the malt character as is. Turned out pretty well, shame it didn't get barrel aged. It will be interesting to see how this one ages, hopefully the smoke doesn't mellow out too much.
The Mad Fermentationist (Mike) at 8:23 PM