Saturday the DC Barrel Guys got together to bottle our first sour beer, the Wine Barrel Flanders Red we racked into the barrel last November. The year had been good to the beer, after a brief period of sickness (the pediococcus getting moving) the beer has developed a bright acidity, and huge fruit (cherry) and oak complexities (look for a full review in a couple weeks once it carbonates.) Of course I forgot to bring my camera, so I don't have any pictures from the actual event, but I am sure Dan (City Brewer) and Nathan (Des Jardin) will post some pictures and their own takes on the day soon.

We debated the amount of priming sugar for a long time. Originally we were working on the assumption that the beer would be wine flat, based on this quote from Vinnie Cilurzo (BYO Jan/Feb 2008) "Remember that if you are bottle conditioning, you'll need to add more sugar than normal, probably 1 cup of sugar per 5 gallons (19 L). This is because the beer has lost all of its CO2 during barrel aging. It is as still as wine when it comes out of the barrel." The beer tasted a bit carbonated though, so we decided to hold back on the sugar a bit, 149 g of corn sugar per 4 gallon batch was decided to be a good compromise (adding 2.45 volumes of CO2 to the beer). We also added some rehydrated champagne yeast to each bucket (20 grams total) to ensure timely bottle conditioning.

We needed to find a way to get the beer out of the bottom of the barrel without lifting it or disturbing the sediment. Noah rigged up his march pump with a 90 degree turned pickup in the barrel. It worked perfectly as we pumped 33.2 lbs of beer into bottling buckets set on Tim's postal scale (easier to divide the beer for priming purposes than volume.) This was the step I was most concerned about, but it gave us no problems.

Noah (Redcar) took a time-lapse video of the barrel emptying/filling, one shot every 15 seconds. Not that you'll be able to pick up too much of our technique, but it is a fun 1:43 (not sure who we should blame for the bucket halfway through).

Overall the day was surprisingly quick and smooth. With that many people we were able to run three bottling stations at a time. From the time we started emptying the barrels to the time all the beer was in (~350) bottles and 20 gallons in carboys and kegs it only took 2.5 hours (and that was with some delicious beer samples from our BrewLocal tour of Bullfrog Brewing and Selin's Grove, and some excellent fried eggplant pizza from Pete's Apizza in Columbia Heights where Dan works).

I took half of my 8 gallon share in bottles (everyone who took bottles got 1.5 cases of 12 oz bottles, and six 22 bombers). Not a bad return on a 5 gallon investment. 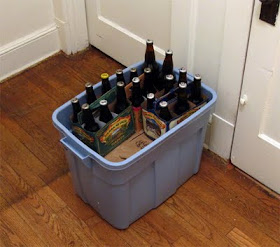 I also took a six-pack of my share and added some bottle hops. I was inspired by a bottle of El Rojo Diablo from Bullfrog (a sour red dry-hopped with Amarillo). I decided to go with a combination of Amarillo, Simcoe, and homegrown Cascade (about one hop cone of each), I thought the citrusy character would match well with the acidity (I was really right - tasting). New Belgium does something similar as well with a pale sour beer to make La Terroir. 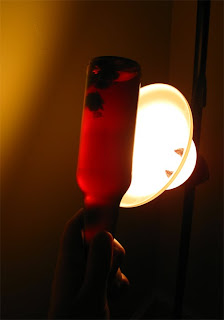 My other 4 gallons was racked onto 2 lbs of sour cherries I bought at the local farmers market and froze back in July. In addition to boosting the cherry character of the base beer it should renew fermentation, boosting the funk and acidity. I'll probably let it age another 3-4 months before putting it into bottles. 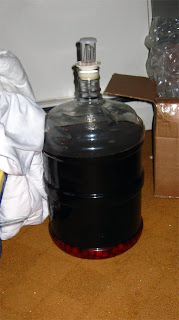 After three hours of bottling we still had the task of racking the next beer (Sour Single) into the same barrel. We did not clean out the barrel, but we did suck out all but ~1 qrt of the slurry (for use in other batches). 20 gallons of the Single had stopped fermenting around 1.020, 10 had just been brewed in the last 36 hours, and 25 gallons had fermented out completely 1.006-1.012. The resulting blend was around 1.030, lots of residual sweetness, but that will be gone pretty quickly (the airlock was starting to bubble just a couple hours after we finished). This beer will probably stay in the barrel until this time next year.

The Barrel Aged Wee Heavy is also coming along nicely. It has a nice bold acidity, but without much funk. It has a solid barrel/oak character, but not too much bourbon character. Hopefully it will be ready to bottle in the next few months, an Imperial Porter is the leading candidate for the next beer into that barrel.

This one turned out great, first tasting.

The cherry half was infused with Sorachi Ace and lime peel and entered into the Iron Mug.