After good luck with a relatively straight forward cider last year it seemed like it was time for me to give a cider with some funk a shot (I am the Mad Fermentationist, right?). Some traditional apple ciders do have a bit of a wild yeast character because they were made from unpasteurized apples (the peel of most fruit are covered in sugar loving microbes), and if it doesn't work out I'm sure I could put 5 gallons of apple cider vinegar to good use... 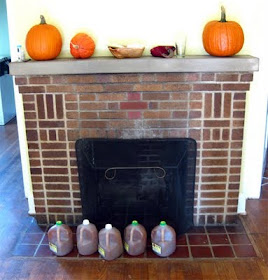 As always hard cider is one of the easiest things to ferment at home. Just dump the cider into a carboy, add some pectic enzyme (I've used 1/2 tsp per gallon in the past, but this time backed it down to 1/4 tsp to see if I could still get a crystal clear finished cider), and pitch the yeast about an hour or two later. 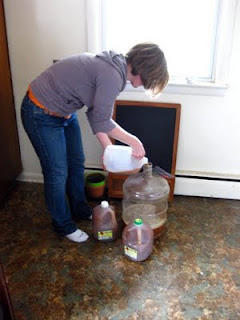 In this case though instead of a clean cider/ale/wine strain, I used some of the slurry from the Wine Barrel Flanders Red (it started out life as Wyeast Roeselare Blend and Lost Abbey Red Poppy dregs ~18 months ago, but I have no idea exactly what is in there now). When fermentation didn't appear to have started after 48 hours I decided to pitch some hefeweizen yeast left over from my Weizenbock. Hefeweizen yeast may seem like a strange choice, but it is a somewhat popular choice these days. The idea is that the fruit esters will boost the aroma of the cider, and you won't get much clove spice because apples lack the precursor needed for the yeast to produce it.

My concern with the general concept of a sour cider is that the sourness will seem too aggressive since cider ends up so dry. That said, because cider is so easily fermented there may not be that much residual sugar for the bugs to eat. Sour beers are generally brewed to have lots of complex sugars that the primary yeast strain can't ferment, but cider can easily get down close to 1.000 even with a regular ale yeast. We'll see how it turns out, if it ends up too sour I may blend it with a malty ale for further aging (New Glarus Apple Ale is the only similar beer I am aware of). 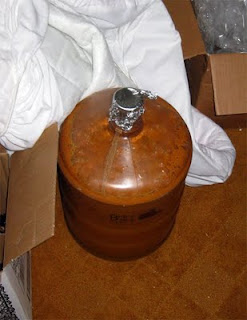 I probably won't really know the results of this one until next fall, but I'd love to know if anyone out there has tried something similar.

Added 1/4 tsp of pectic enzyme to each gallon jug about 2 hours before pitching yeast.

Pitched 16 oz of slurry from the wine barrel Flanders red.

11/07/09 Racked to secondary, still had some activity and sweetness, but that should be fine for the microbes.

6/1/11 Carbonated nicely, although it took a couple months. Not much sourness, lots of complex funk in the nose.
The Mad Fermentationist (Mike) at 10:01 PM