After buying a 50 lb sack of German wheat malt last year as part of a group grain buy I have been trying to use it in as many ways as possible. I did quite a few light beers like a hefeweizen, and added a couple pounds to several other recipes, but I had been looking for something big that would use up a more.

My friend Nathan came back from a trip last fall with stories of The Livery, a fantastic brewpub in Benton Harbor Michigan. They do a huge range of beers, from mild lagers, to strong sours, with lots of barrel aged fun. After doing some reading on them I saw that they make a beer they call Trippel Weizenbock (a big dark lager with wheat) that sounded like just what I was looking for. I wanted to get this brewed in time for Nathan's birthday blow-out in March, but I wanted to let it lager for longer before bottling (it will probably really be hitting its stride by March 2010).

I was able to dig up a little info on the beer from their website ("Definitely the most complex beer coming out of our brewery, Ratebeer.com has rated this as the #1 Weizenbock in the world! Flavors of leather, fig, raisin, and a sweet finish from 33% wheat malt co-mingle with warm alcohol and noble hops for a truly unique beer experience! Also available barrel aged."), but not enough specifics to really put together a recipe. So I emailed the brewer (Steve Berthel) to see if he would be willing to help me out, he graciously obliged:

"I use German pilsener, vienna, and dark munich malts, and English crystal 155-165. 2 hr. boil. German Perle to bitter and Perle and Tettnang in late strikes to balance the malt sweetness. I use White Labs German Bock yeast for now. Starting gravity is around 1.106, finish gravity is around 1.025, giving an abv of 11.75%. Good luck!"

From there it was easy to come up with something I felt would get me in the ballpark. The biggest decision I faced was how much of the Simpson's Extra Dark Crystal to use (an ingredient I hadn't even tasted until my box showed up from Northern Brewer). The flavor of the grains was part way between a regular dark crystal (like crystal 120 or special b) and pale chocolate malt. So I decided to add a full pound to my 3.5 gallon batch, assuming it would be similar to adding half a pound each of crystal 120 and pale chocolate.

I lagered the beer for 4 months in 1 gallon jugs. I left two plain, but to the third gallon I added some bourbon soaked oak cubes (I'll post a tasting of that later).

The flavor is already pretty good, the oaked batch particularly (the oak tannins help to cut through some of the sweetness that the plain batch has). If I were to brew this again I would probably lower the mash temp a couple degrees since in finished .005 higher than the original and has a bit more sweetness than I like. 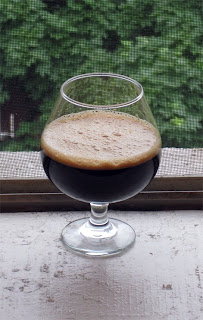 Appearance – Pours with a thin crema of a head on top of a dark brown, nearly black body. When held to the light it is a less dark brown with some red, pretty clear. The head is composed of coarse bubbles, retention is good with some lacing.

Smell – Big sweet nose. Loads of malty goodness with a big overripe fruit character. There is also a nice hint of coffee. As it warms there is a clean waft of alcohol, but it is not boozy or hot.

Taste – Tastes like a huge sticky doppel/eisbock to me. The big bready maltiness is just flowing from this one. The alcohol and just a hint of hop bitterness provides just enough to keep this from being cloying. Despite the fact that this is not one of the ones I oak aged I still get a bit of toasted oak, but it is just the malt playing a trick on me.

Mouthfeel – Big and thick, with moderate carbonation. Spot on for a big bock, but it means I probably won't be drinking much of this one until it cools down in the fall.

Drinkability & Notes – This beer just took a second place yesterday at the Spirit of Free Beer as an Eisbock, an impressive result for a huge beer that is just 6 months old (despite the fact that it was not freeze concentrated, I thought it was too dark/strong to do well as a doppelbock). This is yet another one that I have high hopes for with a bit more age as the complexity increases and the flavors mellow (hopefully as the hop bitterness drops the beer will not become cloying).

Chilled to ~60, but my ground water wasn't cold enough to get it any lower. So I put it into my chest freezer at 48 degrees. 7 hours later I pitched ~1 qrt of slurry from the Helles, very fresh yeast.

12/08/08 Racked to three 1 gallon secondaries, the clear one got 1/2 oz of bourbon soaked American oak cubes. Put into the freezer at 34 degrees. The gravity is down to 1.030 (71% AA, 10% ABV). Pretty good flavor, certainly tastes like a big bock to me. Looks like it will finish a few points higher than I expected, might drop the mash temp to 151 to get it lower next time.

4/28/09 Fully carbonated thanks to the added yeast.

6/13/09 Scored a 37/38/38 and got a second place in its category as an Eisbock at the SoFB. The main complaint from the judges was that it wasn't boozy enough.

2/3/11 Realized I never did a tasting of the oak aged portion, one of my favorites since the oak helps to cut the sweetness.

2/18/14 Final tasting of the oak-aged portion along with the re-brew. Held up well (caramel, dried fruit, vanilla, smooth etc.), but is slowly fading with subtle oxidation.
The Mad Fermentationist (Mike) at 7:48 PM