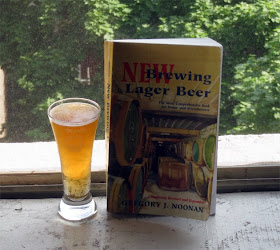 New Brewing Lager Beer: The Most Comprehensive Book for Home and Microbrewers was written by Greg Noonan (the longtime head brew The Vermont Pub and Brewery) in 1986, and received an update in 1996. The preface indicates that this book is about lagers and ales (lagers are just "the culmination of the brewing theories of all European brewing traditions"), I think the English and the Belgians might not agree with that, but lager brewing does tend to be the most precise in its technique because light lagers have such a delicate flavor. That said there are some techniques that are used for ales, but really aren't for lagers that this book completely skips (like dry hopping).

Content: The book is divided into two section (like just about ever other brewing book), the first covers the ingredients used and the second covers the process/techniques.

In the ingredient section each chapter covers both scientific information as well as loads of information on practical things that many brewers may not know how to do.

The barley and malt chapters cover some really interesting topics like interpreting a malt analysis sheet. Malt analysis is very important if you want to do things like decide when to do a protein rest. Strangely the chapter that explains how barley is turned into malt comes much later.

I think that the water section is one of the most comprehensive (although I tend to think How to Brew does a more practical job). Similar to the malt chapter it covers both the scientific (bonding, anions etc..) as well as the practical side (how to read a water analysis report from your water department or a lab).

The hop section is fine, but there isn't as much to talk about as there really aren't hop analysis sheets that are available to the average homebrewer (I've never gotten anything besides an AA%). There is some good information on the structure of the hop cone, something people who use primarily pellet hops might not think about).

The yeast section focuses on a couple of areas that most homebrewers don't concern themselves with. Things like yeast washing, and pure culturing (using agar plates), but there is also some good information on using and saving starters.

The bacteria chapter really just talks about bacteria as spoilage organisms. This is interesting, but doesn't really help (really it comes down to use proper sanitation so you don't have to ever deal with unwanted bacteria).

The final ingredient chapter is a short one on enzymes that covers mostly enzymatic activity in the mash, but also a bit on yeast metabolism (both of these topics should probably have been covered in their respective chapters).

The second (process) section focuses on traditional lager techniques that don't get much coverage in the other big brewing books. Things like decoction mashing, krausening, and lagering.

This section starts out with by talking about the malting process, this is interesting, but not all that useful for the average homebrewer. I think this section would have fit better in the ingredients chapter (I am sure more homebrewers grow/process hops than grow/malt barley).

The following chapters talks about crushing the malt, something many homebrewers don't think about that much. I guess in 1996 there weren't the high quality malt mills available from the likes of Barley Crusher (which has served me well for three years), because corona mills are the only type of home option he mentions. Noonan talks about the quality of the malt having a big effect on the quality of the crush, something I had never thought of.

The mashing chapter is one of the best resources I have found on complex mashes like decoctions. That said, there aren't many malts available any more that really call for a time consuming triple decoction mash.

The boiling chapter covers quite a bit, including the use of hops, the breaks, and cooling. It mostly discusses the science behind the boil than anything practical. It devotes quite a bit of space to determining the boil-off rate percentage, something I don't think is that important as for homebrewers as the pro-brewer (I deal with boil-off as a rate rather than a percentage).

The fermentation chapter is good for lager brewing, but won't help much else. It covers a lot about yeast that I think would have been better in the yeast chapter.

The planning chapter covers doing many things by hand that most people now do with software (calculating SRM, IBUs, OG etc...). If you do this sort of thing by hand still it might be worth a read, but I think DGB does a better job.

The brewing procedures chapter coverts much of the general directions in the other chapters (which could be applied to either a pro or home-brewer) and gives specific how to instructions. It also includes a good troubleshooting section.

The last few chapters and the appendices cover sanitation, equipment, extract brewing, infusion and step mashing. These chapters are fine, but don't cover anything better or in more depth than a basic homebrew book.

Recipes: New Brewing Lager Beer includes seven recipes that cover only classic German styles. I think some of the recipes are outdated relying on malts that really aren't traditional (the Bock calls for brown malt, but no Munich malt). There is also too much cara- malt for my taste (only one calls for less than 1 lb), most of these styles should be pretty dry, and I would hope that all that effort on the decoction mashes would result in good head retention (despite that most contain carapils).

Accuracy: There are some problems here and there (like the suggestion to rack your beer to secondary before fermentation is complete, which often leads to a stuck fermentation), but overall I think this book does an pretty good job.

I also take issue with his hot side aeration discussion the the boiling chapter (which he claims happens if you expose the wort to oxygen when it is above 60 degrees). This seems like lager bias to me as there are not many ales made with the fermentation temperature starting in the 50s.

Readability: The writing is technical, but accessible. It certainly is not written with the lighter feel of something like The Complete Joy of Home Brewing or even the more recent Belgian Trilogy, but it is not as dense as Principles of Brewing Science. Noonan does a good job including charts, graphs (for the complex mashes), and pictures (which always liven a book up).

The book can be hard to reference as why certain things are included in the ingredient section versus the process is unclear. For example it seems to me that the instructions for yeast washing should be in the process section, but they are found in the yeast chapter of the ingredients section.

I would have preferred to see the two sections merged (sanitizers discussed next to bacteria, malt next to mashing etc...) particularly because the the ingredient choice for things like malt plays such a big role on how you conduct your mash.

Overall: I think this is a good book for someone who wants to know more of the applicable science behind brewing. It also is a great resource for decoction mashing, and lagering. I think it is a bit too technical for a first beer book, but I think many brewers could benefit from it early on, even if you don't have a huge interest in lagers. It is a bit dated though, so it would be worth using the information to supplement other books that take advantage of the higher quality malts available to homebrewers today.

Does anyone have other suggestions for books that give good play to lagers? Most of the other homebrew books I have just treat it as a minor variant on ale brewing.
The Mad Fermentationist (Mike) at 2:53 PM