Last night was the second year for the Savor beer and food pairing event. I didn't go the first year because of the high price, but everyone who went told me it was great so this year I decided that I should probably go. The event was located at the National Building Museum an easy 15 minute Metro ride from my apartment, so I really had no excuses for missing it.

I had a really good time, there were plenty of very tasty beers to try and lots of people to talk to (it is almost disturbing how many DC beer nerds and homebrewers I know). I thought it was really good idea to have brewers (or at least reps) on hand to answer questions about the beers they were pouring. That said it was busy enough that it was hard to have more than a brief exchange with anyone who was pouring. The hall was pretty crowded, but for the most part I never had to wait more than a minute or two for beer (Russian River was the main exception).

There were some excellent funky beers to be had, Boulevard Saison Brett, Russian River Consecration, The Bruery Saison Rue, New Belgium Biere de Mars, Lost Abbey Cuvee Tomme, and Avery Brabant. All of them were very tasty, but Consecration (a strong dark sour with currants) really out shined the rest in my opinion.

I was a bit disappointed that some of the breweries that are distributed in the area brought easy to find beers. Sam Adams went with Boston Lager and Summer Ale, Ommegang with Hennepin and Ommegang, Oscar Blues with Gordon and Old Chub, Southampton with Double White and Saison etc... Many of the small local breweries did the same thing. With so many interesting beers and small/obscure breweries I hope there weren't many people drinking the likes of Boston Lager.

The food was just so-so for the most part. Last year they apparently did not have enough food, so this year they really stepped up the volume (it was rare to see an empty plate). That said, because of these huge piles of food I picked up numerous things that were colder than they should have been. In general the food was pretty bland, I understand that you don't want to wreck anyone's palette, but you need pretty flavorful food to stand up to the more aggressive beers.

It was also cool to meet the likes of Charlie Papazian (my friend Dan immediately asked him for advice on a Gose he is about to brew). 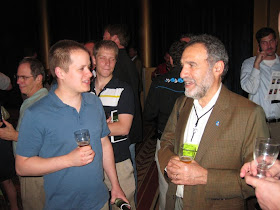 If they have it next year I'm not sure if I'll go, but I would certainly consider it since it seems like every year they are working out more of the kinks.
The Mad Fermentationist (Mike) at 8:20 AM