Back in 1994 Hair of the Dog (during their first year in business) took 300 gallons of Adam (their peat smoked 10% dark ale), froze it twice (removing 200 gallons of ice in the process) to create a 29% ABV beer. After four years of aging Dave (as he is called) took first at the 1998 Barleywine Festival at the Toronado. Since then there were occasional reports of the beer showing up at festivals from time to time. A couple years back some of the beer was bottled for rereleased (in that ugly clear screw-top bottle) at the brewery it (reportedly) had a price of $80 per bottle.

Reviews for the beer were so positive, and it was so rare that at a charity auction for Fredfest last year a single 375 ml bottle sold for more than $700. That is the most I have ever heard of someone paying for a bottle of beer that would most likely be drank.

Ice concentration intensifies both the alcohol and the sugars in the beverage (unlike distillation which concentrates just the alcohols and other volatile compounds). This process is most often associated with German eisbock and American applejack, both of which strive for a balance between boozy and sweet.

For a long time I assumed that ice concentration was considered distillation and was thus illegal for homebrewers. James Spencer over at Basic Brewing Radio talked to both the ATF and the TTB and neither had a problem with homebrewers doing ice concentrations, it would only be a issue (and just a tax one at that) if a commercial brewer did this.

So after brewing up a three gallon batch of Adam clone I thought it would be worth taking a shot at producing something along the lines of Dave (a beer I will probably never get to try). I'm not a huge fan of strong drinks in general, so I just wanted to make a couple bottles to see how the technique works.

I took 1/2 gallon of beer from the secondary and put it into a sanitized tupperware container. I put it into the freezer for 24 hours. The next day when I took it out it was mostly solid. A few quick scrapes with a fork and it broke up into large flakes. 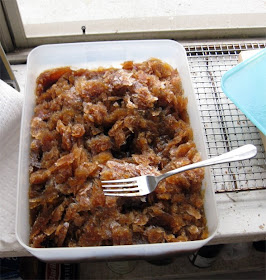 I placed the beer granita into a sieve and let it drain for about an hour. Once most of the color had left the ice (taking with it most of the sugar and alcohol) I discarded it. This step cut the volume in half. The gravity of the discarded ice was ~1.004, so it was mostly water. 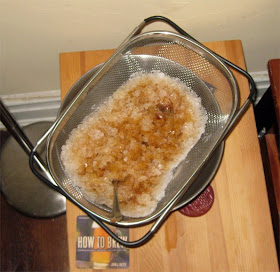 I poured the concentrated beer back into the tupperware and placed it back in the freezer. The concentrated alcohol and sugar worked as a powerful antifreeze, after another 24 hours in the freezer the beer had only turned into a weak slush. I tried letting the beer melt through the sieve again, but this time I was only about to reduce the volume by a small amount (and the ice never got as white as it had the first time). 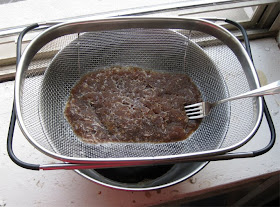 Even without much of a second freeze the FG of the beer had more than doubled from 1.023 to 1.050, which I assume means that the beer had also more than doubled in alcohol to around 22% ABV (since that would mean that both the alcohol and the sugar have doubled). Not quite as strong as the original, but still about 8% bigger than anything else I have made. 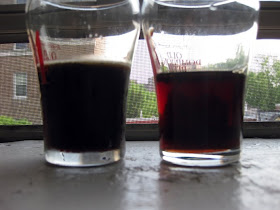 As you can see the concentrated beer (on the left) is certainly darker. The flavor was heavier with an evident alcohol burn on the tongue (even at close to freezing). The flavor was not as sweet as I expected, but it was certainly super-malty. The peat smoke was present, but it was not overpowering. I'll do a full tasting once the beer has some age on it.

Once I was done I filled up two twelve ounce bottles and to each I added a single cube of American oak that had been soaking in bourbon. I'll open one sometime next winter and one a year after that.

Post-Script
Several weeks later AJ and I ran an ABV test on the beer, it turned out to be 17.5% ABV. Not quite as high as I hoped, but still not bad.

Post-Post-Script
I finally tasted the beer about 7 months later and it didn't show any signs of oxidation.  It was still very boozy though and the single oak cube really came through, as well as dark fruit and the peat.
The Mad Fermentationist (Mike) at 6:36 PM