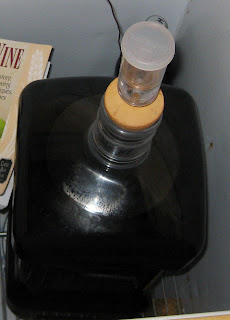 Adambier is a historical style from Dortmund that there is not that much known about. The Home Brew Wiki describes it as "A strong (about 10% ABV), dark, sour beer, which was top-fermented and then aged in wood for long periods; it was always aged for at least a year, and often many years longer." To me it doesn't sound like anything that is made in Germany today (I would only expect a beer like that from a Belgian or American brewer).

Hair of the Dog Brewing does a delicious beer called Adam that is loosely based on Adambier. Their version is closer to a hoppy-peat-smoked-wee-heavy, but it is delicious so I can't fault them. Sean Paxton has a HoTD Adam clone recipe posted over on Homebrew Chef that came directly from the brewer. I love the beer so I figured I would give the recipe a shot (with a few minor substitutions to utilize the ingredients I had in bulk).

This was my first batch using peat smoked malt. It is the same sort of malt that is used in the production of Scotch whisky. Peat is essentially chunks of marsh (given another million years and some pressure and it would be transformed into coal). This smoked malt is much more pungent (creosote is a common descriptor) than malts smoked like German rauchmalt (which uses beechwood) or alder/cherry/hickory wood smoked malt (which is probably why you don't see peat smoked sausages). I backed down on the peated malt called for in the recipe a little because I'm a wimp, and not a huge fan of that character in beer (still .5 lbs in 3.5 gallons is more than most people recommend).

The recipe also calls for an extended concentrated boil, I did 3.5 hours (the longest I have done besides my lambic). Concentrating the boil below the target batch volume encourages Maillard reactions (which add both malt complexity and color). I topped off the beer with boiled/chilled water before pitching the yeast to reduce the osmotic pressure exerted on them. I ended up a bit over gravity anyway, but the Wyeast Scottish ale yeast does a great job in high gravity beers.

I bottled 2.5 gallons of this batch a couple days ago, but I probably won't be drinking more than a bottle or two of it until after the hot summer weather passes. A big, bitter, smokey beer just isn't what I want to drink when it is hot out (the extra time will only improve a beer like this anyway). I ice distilled about 1/2 gallon of it to mimic Hair of the Dog's Dave (a 29% ABV double ice concentrated version of Adam). More on that experiment to come soon.

I will be brewing a beer that is closer to the historic Adambier in the next couple weeks, a rauchmalt spiked doppelsticke that we will barrel age once the wee heavy is bottled in a month or so. Looking forward to how the two beers compare, similar ideas with very different ingredients.

Chilled to 70, strained, shook to aerate (because there was already so much yeast from the ISA yeast cake I don't think growth will be an issue so I didn’t use pure O2).

I must have gotten a bad pre-boil gravity reading because even after topping off with a 1/2 gallon of water I ended up over gravity by .014. I decided to leave it as is instead of topping it off so it can still fit in my 3 gallon secondary after primary fermentation. Boiling down below the batch volume encourages more melanoidin production.

Put into the freezer set at 50 to help cool it down more, turned up to 55 8 hours later.

4/25/09 Weird thing floating on top of the primary, krausen 95% gone. Racked to secondary, topped off with ~1 qrt of boiled/cooled water. Left at 68 degrees just in case there is any more fermentation to come (CO2 release continued for a week or so).

5/12/09 Tastes good, not much peat. Took about 1/2 gallon and put in Tupperware in the freezer to recreate Dave.

7/26/09 Still no carbonation, but even flat the flavor is very nice. With a few more months of age and some bubbles this will be a knockout.