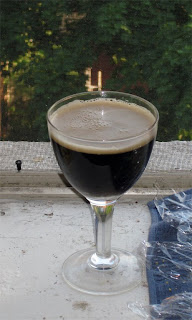 I have only been moderately happy with the “clean” version of the Dark Orange Rosemary Saison that Alex, Noah and I brewed last October. It is a fine beer but it still tastes a bit rough and has a slight soapiness, I am hoping that it will improve with more age. It finished so dry (1.003) that we decided there wasn't much sense in giving the funky version too much time to age. Surprisingly it only took a few months (and a few points) for the bottle dregs and port soaked oak cubes we added to transform the funky version into a beautifully earthy funk bomb.

Smell – Cherries and rosemary come first, but are quickly followed by earthy damp basement funk. There is a faint toastiness, but other than that there is no sign of the malt. The hops are similarly absent, as is (surprisingly) the considerable alcohol.

Taste – No sourness, just a Brett funk manifested somewhere between wet hay and mushrooms. The roasted malt pokes its head out, sort of a weak coffee flavor (milder than the clean version). In the taste I get more of a general herbal note rather than a rosemary specific aroma. The alcohol is well concealed, but there is a hint of belly warming that suggests the nearly 10% ABV. The citrus/orange that was apparent in the clean version a few months back is absent in this one.

Mouthfeel – The mouthfeel has a surprising amount of creaminess for a beer that finished within a couple points of 1.000. The carbonation is moderate-high, which helps to conceal any thinness. I wonder if the tannins from the oak helped to add some body.

Drinkability & Notes – I wish we had given the funk/oak treatment to the entire batch, this one has such great balance and complexity. Certainly in the same direction as something like Fantome Noel or Black Ghost, complex, but still very drinkable. At only 6 months old I am excited to see how this ages over the next year or two (if the six-pack I have left lasts that long).
The Mad Fermentationist (Mike) at 7:47 PM