Here is the process (adapted from Charcuterie by Polcyn and Ruhlman) that I went through to make a simple and tasty cured meat, duck breasts that taste amazingly like an aged ham. The great think about using duck breast instead of a hog's leg is that the higher surface to mass ratio means that the cure and aging take about a week instead of months. The size is also much more manageable, and duck breasts are much easier to find.

I bought two whole ducks (regular Long Island, but something more interesting would work just as well), and took off the breasts and legs. I reserved the four legs for confit (along with all the fat and skin not attached to the breasts).

The four breasts were rinsed, patted dry, and then packed in kosher salt. I put down 1/3 of the salt in the bottom of a Pyrex baking dish, laid the breasts on skin side up not touching, then covered them with the remaining salt. In all it took almost an entire 5 lb box of salt.

After 24 hours in the refrigerator I took the breasts out of the salt. They were noticeably firmer, and a darker shade of red. The salt was the consistency of wet beach sand from the moisture it had drawn out of the meat. I rinsed the breasts in cool water to remove the excess salt and then patted them dry. I gave them a light dusting with white pepper. Other spices could be used either in the cure or afterwards, but I wanted to see how the flavor of just the duck would be on my first try.

I wrapped each breast in a layer of cheesecloth, secured with some string (pink string optional). I then hung the duck breasts in my chest freezer and set it for 50 degrees. A cool basement in winter would probably work as well. 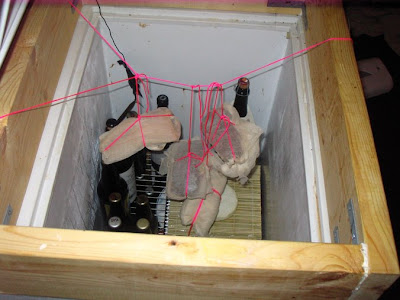 After 7 days hanging in the cool, moist spot then were firm, but not leathery or hard. They smelled meaty, but still very clean/fresh.

Sliced thin on the bias the meat tastes like a slightly gamier version of dry cured ham (Prosciutto, or Serrano). The texture is a bit chewier than cured ham, but that may just be because I am not getting it sliced as thin as a meat slicer would. The flavor is meaty and salty on its own, but also compliments cheese, bread, or fruit (apples or melon) very nicely. It also complimented the flavor of the Dock Street Illuminator Doppelbock that I am drinking while writing this. 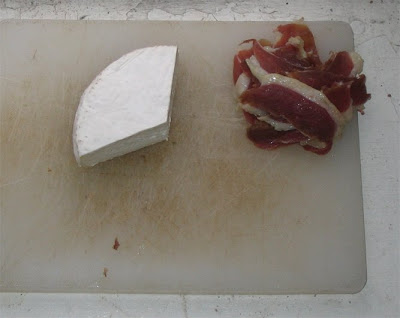 When Scott and I were smoking the bacon we also put one of these breasts on for the first hour at 200 degrees. The result was a salty, slightly chewy piece of meat that very closely resembled a Smithfield Ham in appearance and flavor. The dry cure was probably a bit too heavy handed for this application, but a brine would have been perfect.

The Mad Fermentationist (Mike) at 9:25 AM