Along with four breasts of duck prosciutto my two ducks also provided me with four legs for confit (using another great recipe from Charcuterie). The legs got a quick dusting with 1 oz of kosher salt along with pieces of garlic, bay leaves, black pepper, and cloves. After two days of curing in the refrigerator they had given up a bit of moisture, but didn't look too different. 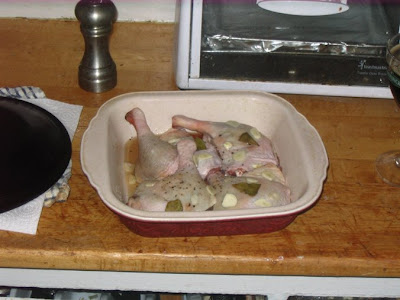 The next step was to render out some duck fat from all of the fat and skin that I had harvested from the ducks. To do this I added a cup of water and brought the mixture to a bare simmer. After 2 hours I strained out the what remained of the skin and chilled the fat. 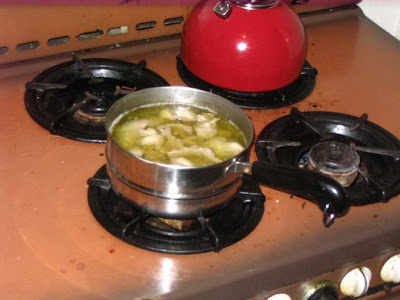 I then cooked the duck legs submerged in the fat (along with a bit of lard) in the oven at 200 degrees for 6 hours. This low slow cooking makes for some incredibly moist and flavorful meat.

After letting the legs stay under the fat for 4 days in the refrigerator I was ready to make Cassoulet. Cassoulet is one of the big French culinary classics, up there with Beef Bourguignon, Coq Au Vin, and Bouillabaisse. I decided to go with a recipe from Anthony Bourdain's Les Halles Cookbook.

The first step was to simmer 5 cups of white beans (which I had already soaked overnight), 2 lbs of pork (I used shoulder, but belly is preferred), a piece of pork rind/skin (I used a piece left over from making bacon), a quartered onion, thyme, peppercorns, salt, and enough water to cover. After 1 hour the beans and pork (meat and rind) were mostly cooked, I discarded everything else (reserving the cooking liquid).

To further add some Maillard reaction flavors I browned 6 sausages (I used German pork sausages) in a bit of the duck fat. 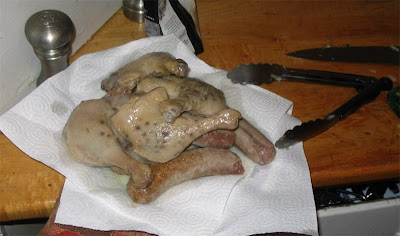 I then browned 3 sliced onions and a clove of garlic in the same pan. Once they were cooked I pureed them with the cooked piece of pork rind. 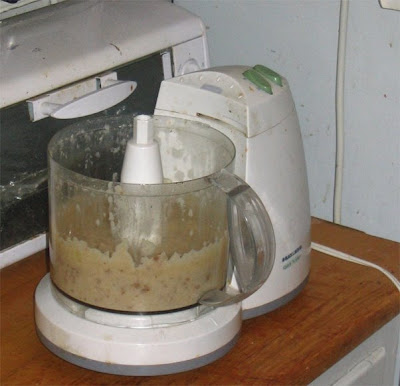 After the cassoulet cooled, I put it into the refrigerator overnight. When ready to eat you could just reheat at 350 for one hour with the lid off to crisp the top. However, I didn't have 8 friends to join me for dinner so I just portioned out the cassoulet and reheated it depending on how much I needed. Here I was cooking for my roommate and a friend. 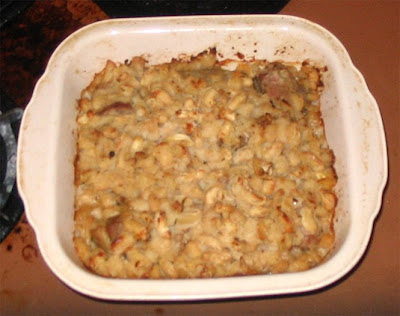 The tender meat and creamy beans were terrific. The flavor is mostly a reflection of the quality of the ingredients and your technique, not over spiced, not too heavy. The one let down was the sausages, which were a bit too dry. My friend Zach (a chef) suggested I try Andouille next time, so that's what I would suggest going with.

If you are looking for something to drink with your cassoulet I would suggest a beer with some maltiness to complement the meat, but still enough dryness to clean the pallet. I though dubbels fit the bill nicely, particularly a bottle of Westmalle Dubbel I had with it one night.
The Mad Fermentationist (Mike) at 5:49 PM