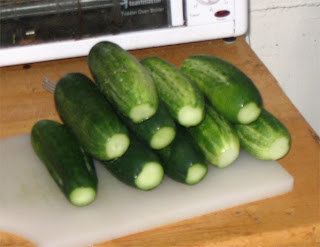 After watching a recent episode of Good Eats called Dill-icious which describes how to make kosher dill pickles at home, I decided to try my hand at it.

On 10/26 I took 2.5 lbs of pickling cucumbers and cut off the ends, according to Alton this removes an enzyme which can damage the maturing pickles. In a 1 gallon plastic container I combined a bunch (literal) of dill, 1 tbls of black peppercorns, and 2 whole cloves of garlic (the ingredient that turns regular dill pickles into kosher dills). I then mixed 5.5 oz (by weight) of kosher salt (pickling salt would be easier because it dissolves faster, but I didn't have any) and dissolved it in about 1 gallon of water. I arranged the pickles vertically in the container and poured the brine over them. I took the excess brine and put it into a ziplock bag (so it won't dilute the brine i
f it leaks) which I placed on top of the cucumbers to keep them submerged. I used a rubber band to secure a paper towel over the top of the container just to stop bugs and dust from getting in. 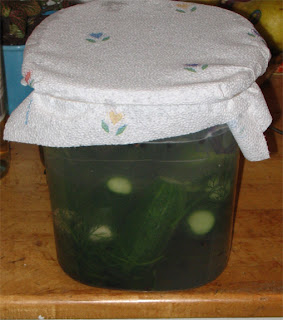 Even though it looks like there are cucumbers/pickles in that ziplock, I assure you that it is an optical illusion (the water filled bag is acting as a lens).

This is a very similar procedure which will cause a very similar fermentation to sauerkraut. The only difference is that you add the salt already dissolved in water instead of counting on it to draw enough water out of the food to form its own brine. 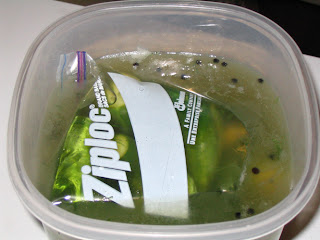 Essentially at this level the salt will inhibit "noxious" microbes, while allowing "tasty" lactic acid bacteria to ferment. Another, simpler way to make pickles is to add acetic acid in the form of vinegar to the brine, and let the pickles soak for a few days. This way can produces good pickles, but they will have a harsher acid character that I do not enjoy as much as fermented pickles. Theoretically you could add food grade lactic acid to the solution as a short cut, but I'll leave that for someone else.

11/03/07 Tasted one of the pickles after about a week, not much sourness and the saltiness is a bit strong and there is still a bit too much "cucumber" flavor.

11/08/07 Moved into fridge a few days after a Pediococcus (?) pellicle formed (last picture). This will shut down fermentation and still let any CO2 out, nobody wants carbonated pickles.

11/12/07 Put the pickles into mason jars and then topped up with the strained pickle juice. 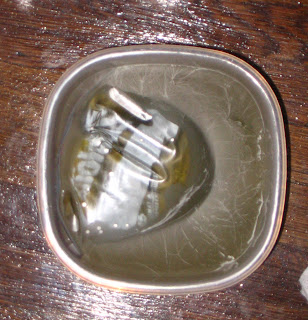