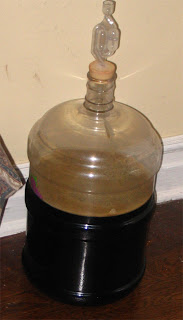 We based the recipe on the one found in Brew Your Own British Real Ale at Home, and a brew log (below) for the Barclay Imperial Brown Stout from 1937, which evolved into Courage RIS, that was emailed to me by Ron Pattinson. I then made some changes based on other research, I used Dark Candi Syrup instead of the caramel that some recipes mention because I know it is a form of caramel and also highly fermentable. I also decided to add Some Brettanomyces and oak, both of which Michael Jackson mentions were found in the original. The Brett will hopefully provide the leather aroma that some people mention in reviews. I used Brettanomyces anomolus which Wyeast lists as originally coming from an English Stout in the 1950's (sadly this strain is now discontinued, but Brett C from white labs would be a good substitute).

This is also an interesting recipe because although it is a stout the only dark grain it has in it is Black Patent, which is generally associated with Robust Porters and a charcoal flavor. I was amazed how smooth both the wort and the uncarbonated beer tasted. I think this is in large part due to the adjustments I made to my water, adding plenty of (bi)carbonate to counteract the acidity of the BP. In fact Courage RIS is not the only stout made without Roasted Barley, both Sierra Nevada Stout and the new Imperial Oat Stout from Southern Tier get all their blackness from Black Patent. 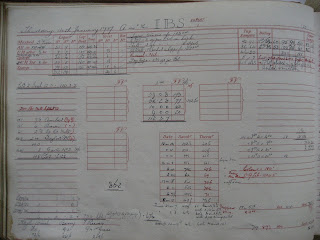 One of the big procedural difference between this beer and my Funky Old Ale is that once it hit 1.020, I attempted to kill the Brett to prevent the wild yeast from making the beer too dry. First I chilled the beer to stop the Brett, then I fined the beer with gelatin and let it sit cool for a few days. Once the gelatin settled I transferred it to tertiary with 3 crushed up Campden Tablets (potassium metabisulfite). K-meta is often used in wine and cider making to kill wild yeast and bacteria before fermentation, but in this case I hope that it was able to kill whatever Brett was left over after the beer was fined. After waiting a few weeks for the SO2 to leave the beer I bottled with priming sugar and some rehydrated US-05 dry yeast. Hopefully the Brett is dead, or I may have some exploding bottles in a few months.

Made a 3 pint starter the night before, probably not ideal but I've gotten by with worse, I won't be pitching until the morning after the brewday anyway.

6 gallons of 1.075 wort collected, including the sugars that were added while the sparge was going. Boiled down to about 3.5 gallons @ 1.115, with the starter and about 1 qrt of boiled and chilled water added the effective OG is 1.101.

The next morning, after a night of cooling in the freezer it was down to 65 degrees, I pitched the now mildly active starter and about a quart of boiled and chilled water.

Solid layer of krausen by 8 hours later, glad I made the starter.

Blow off tube needed by 12 hours, I needed it for about 24 hours.

Fermentation seemed to wrap up after about a week between 63-65 ambient.

8/30/07 Added 5/8 oz of briefly boiled StaVin medium toast French oak cubes and a tablespoon of Brett A slurry (saved from my 2nd Mo' Betta clone). Left in a 5 gallon better bottle with airlock.

10/29/07 Dissolved 1 packet of Knox gelatin in 1/4 cup of cold water, then mixed in 1/4 cup of boiling water. Added it to the beer and stirred/swirled to distribute, then chilled to 62 in the freezer to encourage precipitation of the yeast (not much did).

10/31/07 Racked to bottling bucket, cleaned/sanitized fermenter, then racked back with 3 crushed campden tablets. About 3 gallons of beer remain. No sign of the gelatin, no idea if I just don't see it or if I screwed up somehow. Slight foamy head, probably just from the campden releasing SO2. Left at room temp.

5/01/08 Still has moderate carbonation, looks like the campden tablets did their job and killed the Brett.