The most enjoyable aspect of traveling to talk about brewing is the front-row seat to local beer culture. Whether Brazil, Fargo, or New Zealand (March 2017), the Internet and travel allow homebrewers to get excited about styles and breweries that aren’t available locally. However, wherever I visit I’m interested in how brewers are using local ingredients, sensibilities, and tradition to create something unique! 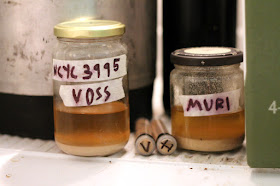 While I was in Oslo and Drammen last spring for Norbrygg Hjemmebryggerhelgen (travel log) there was plenty of American-style (and American) craft beer available, but what caught my tongue were beers brewed with recently publicized kveik strains. Alu by Norse with its balanced smoke, juniper, and orange-peel yeast was a particular standout (and some bottles do make it across the ocean). Unlike the stories of Belgian saison brewers trading strains between farmhouses, with little to connect the history to the present strains, many of these multi-strain Saccharomyces cultures were obtained from farm-brewers within the last decade!

Rather than parrot the hard work that Lars Marius Garshol has done on kveik, I'll direct you to his fantastic Lars Blog (I’d imagine his book is even better… but I can’t read Norwegian). I appreciate both his process posts, as well as technical information like this one about the genetic lineage of kveik! Lars also provided a good looking recipe and instructions in Denny and Drew’s Homebrew All-Stars (where I’m featured as well).

I brought back yeast samples from Norway courtesy of two homebrewers… but you can buy your own for a few dollars from either The Yeast Bay (Sigmund’s Voss Kveik) or Omega Labs (Voss Kveik). One of their most unique traits is a pleasantly clean fermentation at temperatures in excess of 100°F (don't ask me how Norwegian brewers maintain fermentation temperatures that warm). These strains are good options for those who do not have access to temperature control in the summer, or want to co-ferment with Lactobacillus. 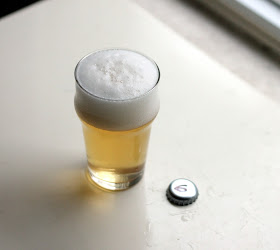 Petter Fornes, one of the homebrewers I met, provided homebrewed samples of two of the most prominent strains fermented at both ale and elevated temperatures. As suitcase-dynamics would have it, I could only fit two more bottles in my checked bag. The other four I was forced to sample in my hotel room before heading to the airport, so excuse the brief tasting notes!

Before I pitched the strains into a more traditional wort (I'm thinking darker with eastern red cedar, Juniperus virginiana, from my backyard and home-smoked malt), I wanted to step them up in a bland un-hopped wort (diverted from the Grapefruit-Quinoa sour). Summertime temperature in my back hall was 30°C/85°F, so that seemed like a good place to start. Un-hopped turned out to be a mistake with the Muri developing a prominent (although pleasant) lactic character. The Voss has a slight tartness, but still retained enough of its character to be worth reviewing.

Smell – Doughy, orange. Bright, fresh, but not much going on. 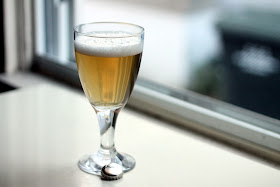 Taste – Rather than Grand Marnier (common descriptor), it is closer to fresh slices of orange reminds me of soccer practice. Bare tartness. Mild apple cider. Refreshing, doesn’t need any bitterness.

Mouthfeel – Light, but not obnoxiously thin. Above-average carbonation helps fill in the body (as does the extra protein from the quinoa).

Changes for Next Time – Next up something more along the lines of the traditional juniper-smoke route! Might make for an interesting citrus-forward IPA as well…
The Mad Fermentationist (Mike) at 6:39 PM