I’m all for avant-garde brewing. Pushing boundaries. Trying something unique or weird that doesn't make complete sense to see if it works. That isn’t where you start for you start a commercial sour beer program though! When I collaborated with Commonwealth Brewing Co. a few weeks after they opened fall 2016, we opted to brew a sour-brown/oud-bruin (original post). When it came time for fruit, Greg and Jeramy added hundreds of pounds of cherries and dates to the tart red-wine-barrel-aged base to create Penthesilia. A combination so obvious that I can’t believe no one else has brewed one before (that I'm aware of)! Assertive cherries are perfect in brown-to-black sour beers, playing off the malt rather than dominating (as they often do in pale sours). Dates are like a character-booster for dark candi syrup and 80L+ crystal malts (I’ve enjoyed dates in dark beers for years, Funky Dark Saison #2 and #8).

If you’re within drinking-distance of Virginia Beach, a trip to Commonwealth is well worth it for bottles of this beauty and its sister Hippolyta (the same base with jammy blackberries and Fig-Newton-y figs). If you are reading this post long after it is published, it’d still be worth a stop for Fernweh (white-wine-barrel tart pale they are releasing 11/3) or one of their delicious hoppy beers! 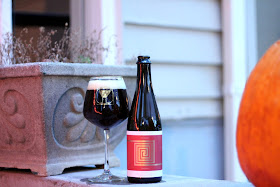 Smell – Dark cherries lead, thankfully nowhere near cough syrup! Behind that is loads of dark fruit and caramel. Hints of vanilla and almond. Distant Brett earthiness. Faint ethanol as it warms.

Appearance – Opaque brown. The off-white head fades pretty quickly leaving nothing behind. As a side note, this gold-accented beauty of a chalice from the brewery is the second flashiest in my collection.

Taste – Rich, dense, and fruity. Like the aroma, the cherry is the most prominent character. Bright and fresh. Then there is a flash of lactic acid. Finally, a big, long, lingering finish of caramelized-dates, nuttiness, and finally toasted oak. Mildly sweet (more than most American sours), which works well with the fruit and malt. Slight warming alcohol.

Mouthfeel – Enough heft to support all of the malt and fruit. Carbonation is above what I prefer, but then I tend to like lower than most. That said, there is enough body that it doesn’t read thin or spritzy.

Drinkability & Notes – I wanted to wait for cooler weather to post my notes on this flavor-packed fruit and malt bomb. The fermentation takes a back seat, but what shows through is good, no acetic, no discordant funk, sour enough without being sharp.

Changes for Next Time – A portion aged in bourbon (or another spirit) barrel might be a nice kick given the firm fruit character, but it is wonderful as is! I think one of the most interesting areas for brewing experimentation is blending of several characters, rather than a sledgehammer of a single flavor. I really appreciate a two-fruit beer with malt, barrel, and microbe characters all melding together to create (obvious) harmony!
The Mad Fermentationist (Mike) at 7:22 PM