Maple imperial stouts... so hot right now. Like coconut last year, mole a few years ago, and whiskey-barrel-aged before that (not that any of those have gone anywhere). Maple syrup is a comparatively mild flavor, difficult to showcase in a flavorful style without resorting to "natural" flavorings or fenugreek.

Founders Canadian Breakfast Stout was the first to really get beer nerds excited about maple-stout. I aged a Breakfast Stout inspired recipe on maple syrup-soaked bourbon oak cubes to replicate the contribution of bourbon barrels that subsequently held maple syrup, but only got a hint of flavor.

More recently Tree House has Good Morning sitting at #1 on BeerAdvocate. I was amazed how intense the maple flavor was, really jumped out of the growler (although I’ve talked to other people who had growlers from later in the same batch with only a hint of maple, not sure if it was palate or beer differences). Toppling Goliath’s Mornin’ Delight is #2 on BA (although I’ve yet to get a chance to sample it).

Rumor is that some well-thought-of maple beers are brewed with 10% or more by volume (e.g., a half gallon of maple syrup in a five gallon batch!). That seemed like too much simple sugar, so for this batch of Adam I added only a quart (5%) of Grade B as fermentation slowed. Some brewers suggest dosing the syrup into cold beer to prevent refermentation, but I didn't want that much sweetness in the finished beer. Others suggest adding it early in the boil to encourage the Maillard reaction between the sugars and proteins, but I worried that the fermentation would scrub out volatile aromatics. I wasn't worried about boiling them off though, as maple syrup is created by boiling for many hours. 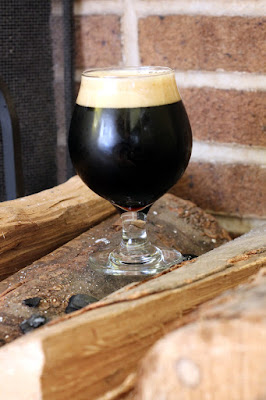 Usually I bottle big beers to space out my enjoyment, but not 13% ABV big! I didn't want to risk two cases of uncarbonated beer (like my first Adam clone) so I kegged and force carbonated. Nice to have the option to pour a few ounces without committing to a whole 12 oz bottle, but tough to tie-up a tap long-term. After a few months I disconnected the keg to put the Saphir Pilsner on. Doubt I'll tap it again until next fall. I actually dusted off the last bottle of my original Adam clone to share while brewing a more traditional adambier with a group of homebrewers in Fargo, ND a few months ago: still delicious, and Hoppy Halloween was a blast!

Appearance – Brunette body with a tan head. Dark enough to be nearly opaque, but clear edges when held at an angle. Decent retention for a liquor-infused strong ale.

Smell – Light woodsy smoke, caramel, vanilla, and hints of clean ethanol. Varied aroma, but given everything that is in there not especially intense. Not too phenolic as I’ve heard complaints about Briess cherry wood smoked malt.

Taste – Sticky-intense caramel maltiness. Bourbon notes come through in the finish (vanilla with a hint of butterscotch), about the right intensity. Mellow maple syrup contribution despite accounting for 12% of the fermentables. Finish is a nice blend of oak and hardwood smoke. The cherry wood malt melds well with the bourbon and maple, but none of them are bold. How some of those commercial maple beers get such an assertive aroma/flavor is beyond me!

Mouthfeel – Full and luscious. Despite being on the same PSI as my other kegs this one never seems quite as carbonated, not that I’m complaining!

Drinkability & Notes – The blend of smoke, booze, and maple evokes my trip to Montreal and dinner at Au Pied de Cochon, which was the goal. A hulking 13% ABV beer in a relatively drinkable cloak. That is good and bad – for that much alcohol I want a WOW beer and this is a pleasant sipper. I’m not an “It hides its alcohol well” fan, I’d much rather a 9% beer drank like 13% than vice versa (not hot or boozy, but rich, full, complex, intense etc.)! Should age beautifully!
The Mad Fermentationist (Mike) at 7:14 PM