Like my annual slice of pumpkin pie, I think I'm going to enjoy pumpkin ales more than I usually do. I never really love the standard formula: caramel-sweet amber/orange ale, overbearing spicing (sometimes augmented with ingredients like gram cracker flavoring), and no pumpkin flavor. Skilled brewers can make it work, one of my favorites is Selin's Grove's Pumpkin Ale, served only on nitro at the small central-Pennsylvania brewpub. The creamy head and subdued spice aroma combine to make it one of my favorites of the classic formulation.

As far as clean pumpkin ales go, stouts and porters provide a better base. As pumpkin-spice-latte devotees have discovered, restrained roast is an easy pairing for warming fall spices (cinnamon, allspice, ginger, nutmeg, clove, and vanilla). For beer, rather than add coffee to an amber base, I prefer chocolate and roasted malts. I brewed a small batch of Chocolate Pumpkin Porter seven years ago inspired by the description of Midnight Sun's TREAT (never having had it). Luckily I wasn't disappointed when I finally bought a bottle five years later!

For this batch, I originally intended to add canned pumpkin, but two local supermarkets weren't carrying it in early August. Instead I purchased two butternut squashes totaling 6.5 pounds. They are easier to dispatch than sugar/pie pumpkins thanks to smaller internal cavities, and their flavor is somewhat more characterful. Rather than roast the chunks of flesh, I steamed them, in the hopes of bringing out more of their squashiness. 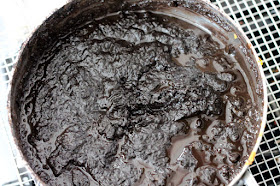 With the flesh broken down enough to mash, I stirred in the Dutch-process cocoa powder, custom pumpkin pie spice mix, vanilla bean, and a half tin of black treacle (the English cousin of molasses - light molasses would be an acceptable substitute) and continued to cook the mixture a few more minutes. This took the place of the standard "blooming" process I usually execute with cocoa powder (rehydrating it with hot water). Unrefined sugar and vanilla compliment chocolate, they help to make it taste more deeply chocolaty. In this case I didn't want the treacle to be strong enough to identify, but something you'd miss if it was taken away.

I dumped the resulting "vegan brownie batter" into the fermentor and pumped the cooled wort on top of it. Squash has relatively little starch, so it isn't necessary to convert it in the mash. You could add it to the boil, but I find it imparts more flavor during extended contact in the fermentor (it settles out pretty well if given enough time). In the past I've added a spice tea at bottling/kegging when I want to taste the "true" spice flavor (as opposed to Belgian-style late-boil addition for spice complexity), but I wanted to try this method. At packaging I tasted the beer and decided it didn't need a spice boost.

This was only half of the batch, I left the rest as a plain porter - although I have a twist planned for it before it goes on tap... I'll talk about the base recipe (including stout malt) when I post the tasting notes for it.

Appearance – As chocolate brown as a beer can be without being black. You get the feeling this would be a pretty ugly (muddy) beer if it weren’t so dark. Between the cocoa powder and the squash, there is plenty of haze when viewed at the margins. The head is creamy, but not as long-lasting as some of my other nitrogenated beers. 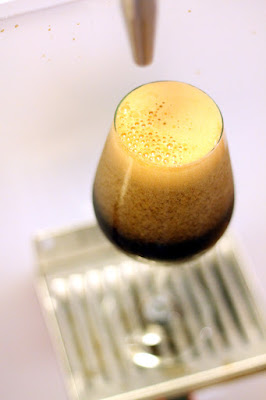 Smell – Rounded cocoa-roast leads, followed up by cinnamon (and other more nebulous fall spices). Like a spiced chocolate muffin, it doesn’t smell too sweet, with fresh bready maltiness filling out the background. Lots of different spice notes as it warms (nutmeg especially), luckily the clove is subdued. The squash comes through in the same way it does in pumpkin bread, as a pleasant sweet vegetable note.

Taste – Spices are saturated through the palate without overwhelming the other flavors. They aren’t as bright and distinct as when I’ve used a spice tea, but with such a complex beer this technique worked well. The chocolate is behind the spice, mixing with the roast. The treacle and vanilla are faint. Sweet enough to support the autumnal flavors, without being sticky. The squash flavor is subtle at best, but it adds a slightly fruity-savory flavor in the mid-palate. The flavors of the base beer itself are a bit lost with so much else going on, the hops and yeast are all but absent.

Mouthfeel – Really silky, one of the most viscous, unctuous, full bodied beers I’ve brewed! Especially considering the moderate alcohol. I’m sure the flaked rye and high FG helped, but I have to imagine the starches and fiber in the squash played a role as well. Carbonation is low, but the dense head only adds to the luxuriousness.

Drinkability & Notes – It’s a fun beer. Balanced, expressive, and drinkable for what it is. However, it’s such a rich/full beer that it isn’t exactly a second or third pint sort of beer. Glad I got it on early in the season so I can slowly enjoy it through the fall!

Made a 4L starter 24 hours in advance. Good activity quickly on the stir-plate.

Added 4.5 g of sea salt to the boil. Chilled to 64 F with recirculated ice water.

Racked 5.5 gallons to each fermentor, one had the cooled chocolate-squash-spice paste. Shook to combine, pitched decanted starter, left at 64F to ferment.

9/13/15 Hooked Butternut half up to beer gas in the kegerator. FG 1.026 (61% AA, 5.3% ABV). Likely a little higher alcohol and attenuation considering I didn't take an OG reading after mixing in the squash mixture.

2/9/16 Tasting notes and process for the "plain" half, revived with cold-steep dark malts in the keg.
The Mad Fermentationist (Mike) at 5:16 PM