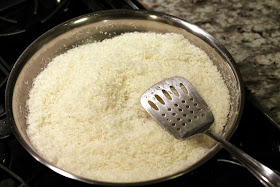 My favorite bourbon-barrel-aged stouts aren't the ones that taste like beer with a shot of bourbon dropped in, instead the chocolatey roasted malts are offset by sweet vanilla, toasted coconut, and a touch or boozy heat. Why not try a shortcut then (avoiding the time, effort, and risk of acquiring a used barrel to age stout in), by adding real vanilla and coconut from the supermarket?

The base beer I brewed is an inky oatmeal stout, at a sessionable 4.9% ABV. I added three roasted malts and two crystal malts to give it the malty intensity of a stronger beer. I dry hopped the other half of the 10 gallon batch with three ounces of Simcoe (inspired by Goose Island Night Stalker). As a result I settled on 30 IBUs, a little higher on the bitterness than I would have if I had brewed the sweet portion alone. 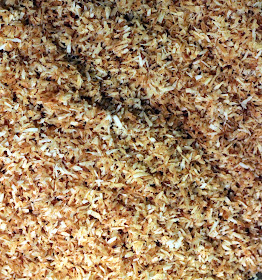 For the coconut I purchased one pound of unsweetened shredded coconut from the bulk bins (hopefully fresher than the bagged stuff). It had a mellow sweet-floral flavor as is, but I wanted something darker and more intense to jive with the roasted grains. I placed all of the coconut in a large skillet set to medium-low heat. After 20 minutes of constantly stirring the coconut took on a golden brown color and exuded an enticing toasted coconut aroma. It is helpful to do this in a pan with good heat conductivity to avoid hot spots (I used my 12-inch tri-ply Tramontina skillet – I’ve been satisfied with it so far and a set of their pots is the same price as a single All-Clad saucier).

I watched Alex Tweet use this process for a coconut cocoa-nib variant of Black House while I was at Modern Times summer of 2013 (Alex has since moved on to be head brewer at Fieldwork Brewing Co.). After the coconut achieved the desired level of color in a keggle he blotted the oily shreds with paper towels to wick-away much of the head-destroying oil. So I did the same, rolling up the coconut in a few layers and letting it drain. There is no practical way to remove all of the oil, but hopefully most of what makes it through is left behind in the fermentor or floats to the top in the keg. I lowered a weighted bag of coconut into the primary fermentor then dropped in two vanilla beans split lengthwise. 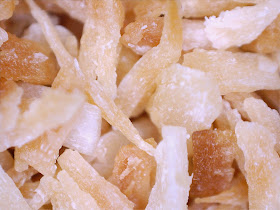 A sample pulled at five days indicated it had reached the level of character I was hoping for. Fermentation had dried the beer out to 1.018, so I did a few measured blends and settled on adding half a pound of lactose (briefly boiled in a pint of water) to the keg – technically transforming this into a milk stout. No reason to add lactose or maltodextrin any earlier than packaging. It is a little more work than adding it to the boil, but waiting and tasting avoids the risk of an overly-sweet result!

To add another layer of velvety decadence I bought a beer-gas tank and a stout tap (treat yo self 2014!). If the oils from the coconut destroy the head retention, I'll be really disappointed! I’ll have more on how that goes when I post the tasting notes in a couple weeks. The addition will be part of my upgraded kegerator build; my original is third-hand and starting to look pretty sorry considering the rust spots. It was time for a couple more real taps anyway! 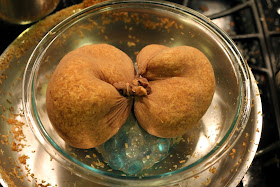 Temp fell more than expected, turned on heat while recirculating to get back up to 160F before sending to kettle.

Chilled to 65 F with plate chiller. Oxygenated for 60 seconds, then split the decanted and ambient temp yeast between the two fermentors. Left at 67F to start fermenting. Moved to the 60F basement after 18 hours.

11/26/14 Dry hopped half with 3 oz of bagged whole Simcoe. Upped to 67F to ensure fermentation is complete.

12/8/14 Down to 1.018. Kegged both versions. Added .5 lb of lactose to the coconut/vanilla half. Purged both with CO2, although that tank was running out. Hooked the coconut keg up to beer-gas the next day in the freezer set to 35F.

1/14/15 Tasting of the dry hopped portion. It expresses a nice mixture of dry hops and roasted grains. Not much I would change for a rebrew, except to back off the roasted barley slightly to remove the charred edge. pH is 4.30.

2/10/15 Tasting of the coconut-vanilla portion. Really delicious, nice balance of the extras and the base beer. A little sweet, but worth it for the silky body in a 5% ABV beer.
The Mad Fermentationist (Mike) at 7:36 PM