I brewed my fourth batch of Berliner Weisse spring 2012. The twist for this iteration was that I skipped my usual single decoction mash (to see how the method might perform if I were forced to brew it on a commercial system incapable of decoctions). I’m well aware that decoctions repeatedly fail to impress in blind tastings (e.g., Decoction: Worth the Effort in Zymurgy Nov/Dec 2014), but psychological or otherwise I tend to enjoy decocted batches more than similar infusion-mashed batches. Sour beers are notoriously tricky to run experiments for, because even two batches with the same process and microbes can come out pretty different. So don't read too much into the results for this batch!

Other than the mash alteration, my process was the same as my previous batches: mash hops, no boil, and a mixture of clean ale yeast, Lactobacillus, and Brettanomyces. The other half of this batch was fermented with nothing but Lactobacillus. This is actually my forth tasting involving portions of this brew day! This half worked very well with rhubarb. 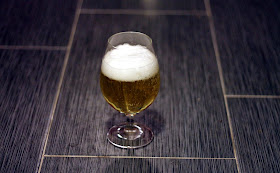 Smell – Green apple, dusty Brett, and light pilsner malt. Funkier than a Berliner weisse typically is, but about where I like them. However, it’s a bit stodgy, musty, and not as alive as it could be. I'd hoped the Brett Trois would bring the citrus a bit more.

Taste – Bright lactic tartness, but not sharply acidic. Slight doughiness in the finish, luckily no Cheerios-cereal. No alcohol or hops. Two-and-a-half years old and sadly tasting like twice that. It lacks a freshness and vibrancy that a sour beer should still have at this age.

Drinkability & Notes – Solid, but not my favorite batch of Berliner. Not as refreshing as it should be. Likely a combo of the skipped decoction and the lackluster activity from the Lactobacillus. I’m enjoying the early results of my fifth Berliner much more!
The Mad Fermentationist (Mike) at 6:16 PM