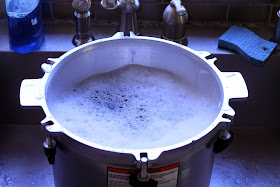 Why do so many homebrewers skip starters for their liquid brewer's yeast? Pitching enough healthy cells can have a greater impact on the quality of a batch than anything else you do on brew day! Maybe because from start to finish making a starter can take almost an hour. Using an Erlenmeyer flask makes the task easier, by allowing you to boil, chill, and grow in a single vessel. Adding a stir-plate creates denser yeast cultures, the result is less wort to boil and chill for a given target cell count. Still I’m lucky if I can go from getting equipment out to pitching yeast in fewer than 30 minutes. Sometimes half an hour is hard to come by on a weeknight! 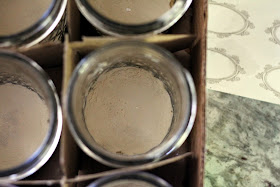 Not anymore! My new pressure cooker allows me to produce a large volume of shelf-stable sterile wort at one time. I can produce enough wort for 10 starters in one afternoon. That way all I have to do to make a starter is sanitize my flask and add the wort and yeast, done! The key is the pressure (15 PSI) generated by the canner causes the wort to boil at 250F (121C), hot enough to kill Clostridium botulinum in a reasonable amount of time (it would take 7 to 11 hours in boiling water). While boiling at 212F (100C) is more than enough to kill all the microbes brewers usually worry about, this is only because we are working under aerobic conditions initially and pitching enough brewer’s yeast to quickly lower the pH and produce alcohol thus inhibiting the nasty microbe responsible for botulism. C. botulinum is all around us (mostly in dirt), but really thrives in the anaerobic environment created by boiling-water canning. 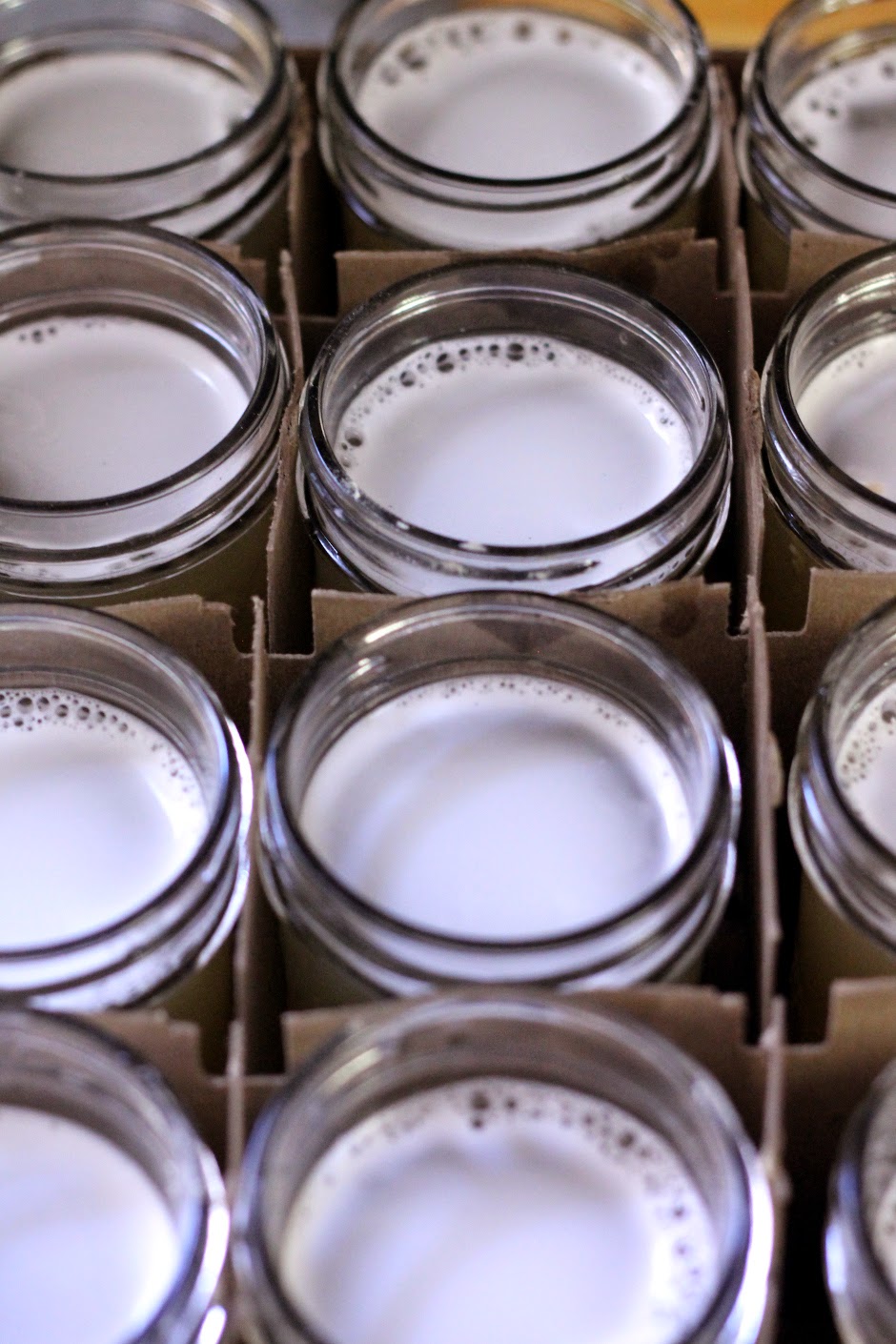 If you don’t have a pressure cooker/canner there are two alternatives to prevent C. botulinum from growing in canned wort. You could add enough phosphoric or lactic acid to lower the pH of the wort below 4.4. This is acidic enough to make reasonable time hot water-bath canning safe (as it is for many fruits). Alternatively, you could store the canned wort in the refrigerator, C. botulinum will not grow if the temperature remains lower than 38F (3C). Personally the risk (however small) of botulism poisoning (paralysis followed quickly by death) with these methods isn’t worth the time/money savings!

Equipment
I purchased an All-American 25 Quart Pressure Cooker/Canner a few months ago for $230. It’s super heavy-duty aluminum, and doesn't rely on a gasket to seal, so I’m expecting it to last at least the next 50 years of my brewing career. There are less expensive options, but I try to buy things that will last when I am able to. A pressure canner can also serve as an autoclave if you are planning to do sterile culturing for yeast isolation and wrangling (where sanitation isn't good enough). The All-American even looks a bit like a mini-version of the one Pasteur used. In addition you’ll need your desired-size Ball jars (which come with rings and lids) and optionally a jar lifter. That's it! 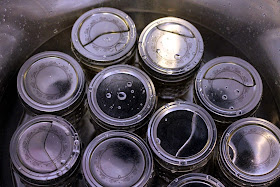 Wort Production
You may not want to produce the same density of wort for all starter applications. I like having small jars filled with low gravity wort for harvesting microbes (8 ounce jars with 10 grams of light DME and a pinch of yeast nutrient). They are easy to take to a tasting or a bar if you want to collect bottle dregs (harvestable bottle dregs list). Pop the lid, pour the dregs in, and screw the ring back on. When you get home you can transfer the inoculated wort to a sanitized beer bottle with a No. 2 stopper and an airlock. Or simply keep the Ball jar in the fridge if you want to prevent the microbes from growing – remembering to vent the lid periodically. 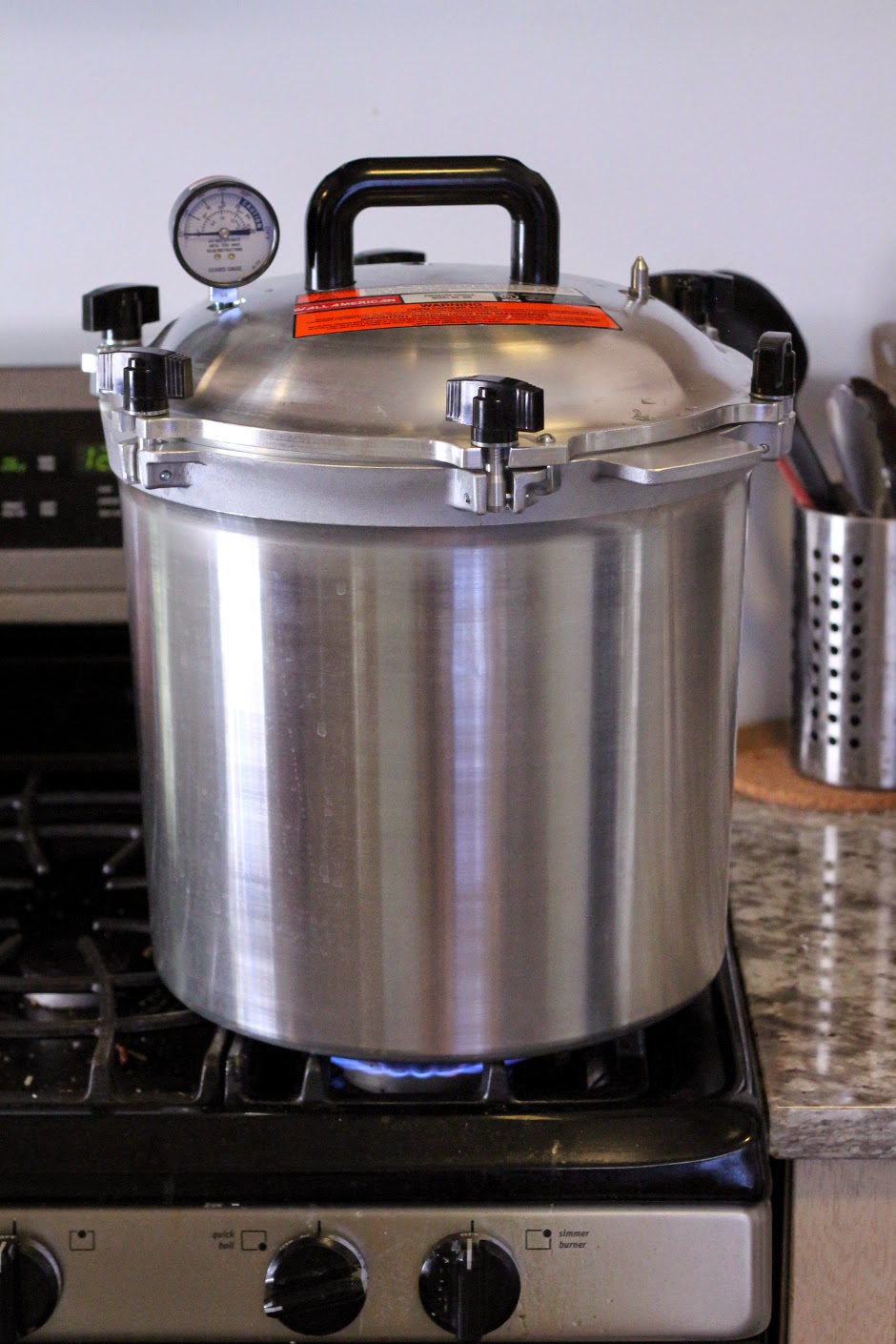 If you are planning to use the canned wort for traditional starters, Kristen England suggested canning high gravity wort (I'd keep it around 2-3 times stronger than your target starter gravity). That will allow you to can less and yield more by diluting the starters with water. It all depends on how concerned you are about the sterility of that water. I am comfortable adding bottled water directly to chilled wort without boiling/chilling. If you want starter wort that is ready to use for growing commercial brewer's yeast cultures, aim for a standard 1.040.

To reach the target gravity you can use malt extract, extra runnings from a brew, or a purpose brewed “beer” for a year’s worth of starters. If your starter wort is all-grain, I’d suggest boiling it first. At Modern Times I brewed a 3 gallon no-sparge batch that I drained directly into jars for canning. The result was the most intense DMS aroma of tomato soup I’ve ever experienced. With the high temperature and lack of steam escaping it shouldn’t have been a surprise. Not a big deal if you decant the starter wort, but it made evaluation of the microbe starters tricky until they were stepped up. Pre-boiling isn't necessary for malt extract, which has already gone through a full boil during production. 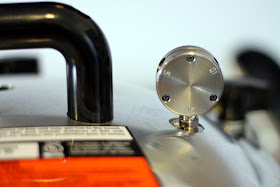 Process
Make sure to follow the instructions for your canner when it comes to processing. Start by washing all of your equipment is hot-soapy water. Rinse with warm tap water to remove all of the soap. While you're rinsing, inspect the jars and lids for chips, dents, and cracks. Don't use any that are anything less than pristine.

Fill the jars with wort or water/DME, leaving ~3/4 inch (2 cm) of space at the top of each jar (this is necessary to form an adequate vacuum during cooling). Hand-tighten the rings over the lids. The ring only holds the lid in place during processing, so it doesn't need to be too tight. Arrange the jars in the canner on the rack, trying to leave a little room around each one to promote even heating. Add hot tap water to the canner, enough to come a few inches up the jars. You can add a second level of jars on another rack if they fit. Lock the lid on the pressure canner.

Begin heating on high. Once steam is escaping from the vent, wait seven minutes, and then install the weight. At this point the pressure will slowly rise. Once 15 PSI is reached, the weight will begin to sputter, hiss, and rattle. Only now do you begin the timer (15 minutes for 8 oz jars, plus 1 minute for every 1,000 feet above sea level to compensate for the lower ambient air pressure). Adjust the heat so that the weight continues releasing pressure, but it doesn't nee to be violent. After the time is complete, turn off the heat and allow the pressure to dissipate slowly. Once the pressure returns to 0, remove the weight and then the pressure canner's lid. 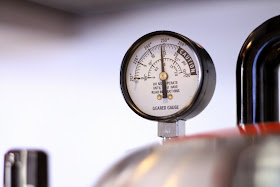 Once the jars cool completely, press gently in the center of each lid. If they pop up and down this indicates that the vacuum seal was not successful. The wort is these jars should be used immediately or discarded. Partially unscrew the rings on the successfully sealed jars. At this point the suction of the vacuum in the headspace is holding the lid on. If this vacuum fails to hold the lid at any point, discard the starter wort in that jar. Only use the lids once, but the jars and rings can be saved and reused as long as they remain undamaged.

At the moment I have six empty sour-beer-only carboys, so I’ll be harvesting some fun microbes. Starting with a couple raspberries still hanging on the bush in our backyard. I also have some exciting sour beers I have hanging out in the basement in need of harvesting as well (Russian River Beatification, Trillium Lineage Wheat and Rye, Cuvee de Ranke, and a bunch of gueuze). 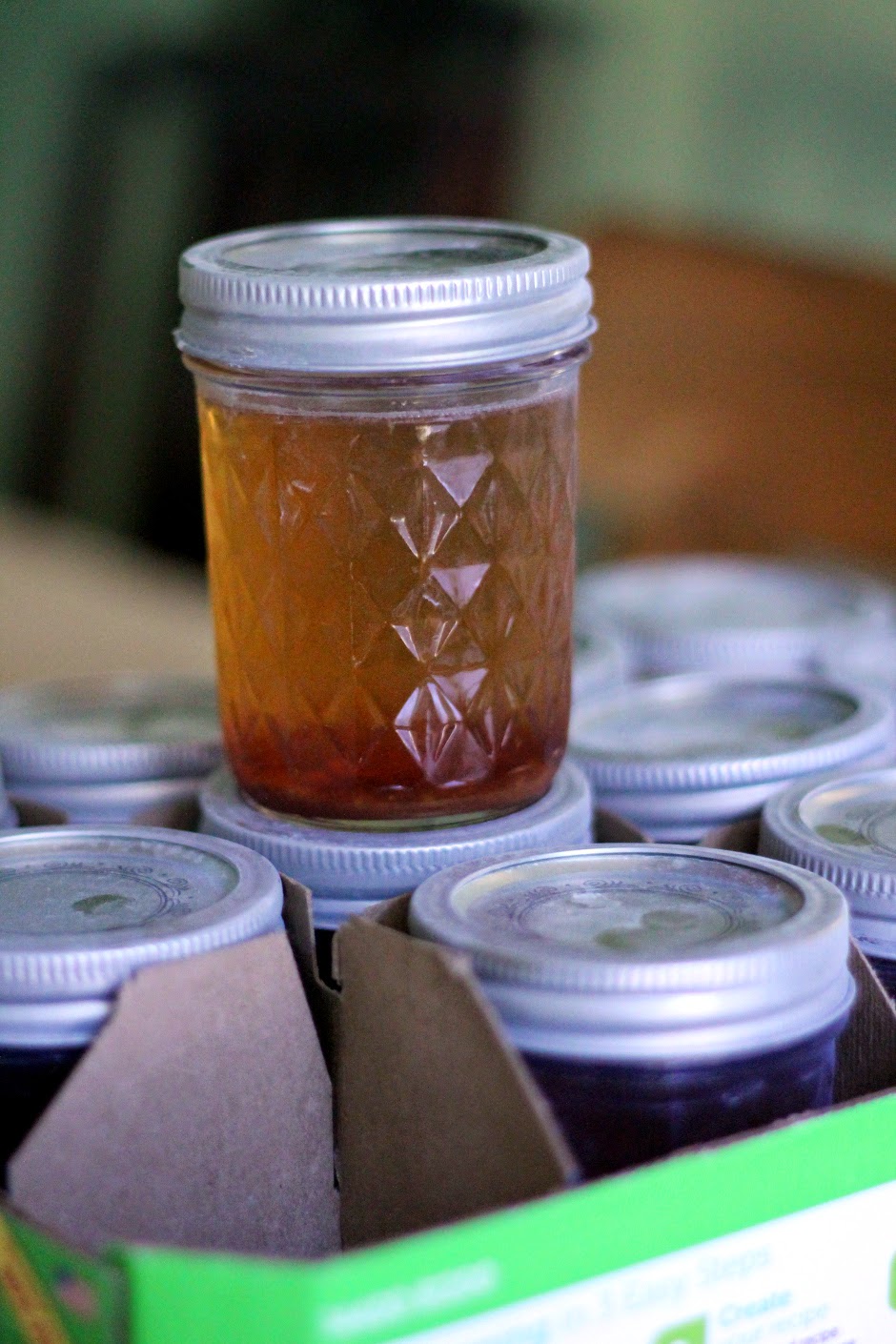 Feel free to post any additional tips or chili recipes in the comments!
The Mad Fermentationist (Mike) at 5:14 PM