A few months ago I was asked to speak at a Mid-Atlantic Master Brewers Association of the Americas (MBAA) meeting. I opted for an enhanced rendition of my 2014 National Homebrewers Conference presentation (The Influence of Mashing on Sour Beer Production - audio/slides for AHA members). The only significant complaint I received about my original presentation in Grand Rapids was that I didn't serve any beers to illustrate my points. The MBAA meeting was at Lost Rhino Brewing Co, easy driving distance, so I got brewing immediately. Glad I did because both the presentation and example beers were successes! Apparently I made enough sense to sell copies of American Sour Beers to a bunch of craft brewers (and even a couple MillerCoors guys)!

Taking a step back, on a hot July day I brewed two separate batches with identical malts and hops. For one batch I performed a single infusion mash and fermented with English Ale yeast. For the other I started with a ferulic acid rest (113F for 15 minutes), before raising to the same saccharification temperature, and then fermented with a Belgian Ale strain. The goal was to taste the influence of freeing additional ferulic acid from the malt and its subsequent conversion to spicy 4 vinylguiacol (4VG) by the yeast, compared to the control. According to the science, Brett takes 4VG and converts it into 4 ethylguiacol (4EG), a big part of the classic funky-phenolic-baryardy character.

That phenolic brewer's yeasts are more effective at converting ferulic acid to 4VG is one reason that 100% Brett fermentations tend to be less funky than their mixed-fermentation counterparts. While access to additional carbohydrates causes Brett to produce more esters (making 100% Brett beers fruitier) additional phenols are not generated in the same way.

A four month turnaround is a bit tight for a mixed-fermentation, but I did my best to speed the process along, pitching a starter of White Lab's Brettanomyces bruxellensis and naturally conditioning in the keg. Luckily there was about a gallon of each beer left in the kegs after my presentation, so I'll be able to revisit this tasting in six month or so!

Appearance – Hazy golden, headed towards light amber. This would likely clear up given more than a couple days in the fridge. The beautiful sticky white head trails solid sheets of lacing down the walls of the glass.

Smell – Very Belgian nose, mild spice, pear, Brett is there, but subtle. It is young, but at Brett-plus-100-days I was hoping for a little more funk. Pleasant, but not enticing.

Taste – Solid Belgian pale with Brett. Light hay, not much horse blanket (or "stallion cover" as a knock-off version of my book calls it) to be tasted. Could be drier, which should come with time. Some toasty-bready malt. Slight hop bitterness, but no real hop oil profile. Dry, but not bone dry.

Drinkability & Notes – Nothing out of the ordinary, it reads as you would expect a young Belgian pale finished with Brett. Despite the time keg conditioning, it needs another few months to achieve the volume of Brett character I was anticipating. 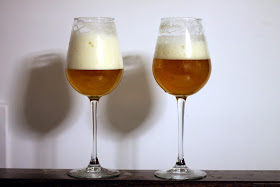 Appearance – Identical, if maybe a half tone darker/clearer. Same beautiful head and lacing.

Smell – This is where things get weird: big clove (aka 4VG)! The Brett is slowly working to convert the ferulic acid to 4VG, and apparently I caught it in the middle. No real funk yet, but assuming things continue like this there should be eventually.

Taste – Like a hefeweizen fermented cool with WLP380 Hefeweizen IV, very low fruit, but tons of clove and spice. No classic Brett character yet. As is the flavor is harsh and rather unappealing, especially as I was expecting this one to be fruitier. Comes across as slightly more bitter/harsh as well, almost a solvent edge.

Mouthfeel – Similar, but the carbonation is slightly higher. The primary fermentations finished at the same gravity, but I haven't checked them post-Brett yet.

Drinkability & Notes – This is why you take the time experiment (cough cough Experimental Brewing). While my original hypothesis was correct that the Belgian primary strain would accelerate the eventual production of funky 4EG, I didn’t expect the English primary strain to yield such a spicy beer at this point!

If nothing else, fermenting with a phenolic brewer's yeast seems to speed up the conversion of ferulic acid to 4EG in a beer with Brett. While I have made many wonderful sour beers with English, American, and lager yeast primary fermentations, it seems like Belgian (or hefeweizen) strains are your best bet if your goal is funk with a short turnaround time.

It will be really interesting to see where these two beers end up when the Brett characters stabilize. Will the funkiness of the English yeast primary fermentation eventually catch-up, or will there always be a difference in the level of funk? You'll find out as soon as I do!
The Mad Fermentationist (Mike) at 7:36 PM