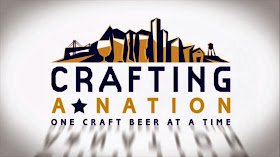 Over the last 10 years, there have been several documentaries which examine American craft beer. The first one I watched was American Beer, shot on a road trip to numerous great breweries. A few years ago I reviewed Beer Wars, which examined the economic struggle between large and small breweries. A couple months ago the production company behind Crafting a Nation sent me a DVD copy to review. I finally got around to watching the end of it during my flight to GABF.

Crafting a Nation’s focus is on the rather serious endeavor of opening a brewery. It paints a vivid picture of the time, money, and hope that craft brewers invest into their businesses. However, it fails to put much emphasis on the beer itself; the story it tells is primarily an economic and personal one. I understand that not everyone wants to watch 95 minutes about the brewing process, recipes, etc. but there was virtually nothing about beer itself outside a dumbed-down opening overview of the brewing process. 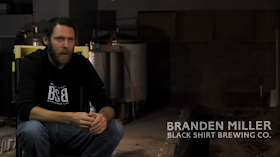 On the positive side, the movie was beautifully shot, the sound was clear, and it tells a well-developed narrative. The primary focus is on Black Shirt Brewing Co. Through the course of the Crafting a Nation we return to see their progress and setbacks, culminating with the opening night of their tasting room. Over more than half an hour of screen time though, we hear that they are planning to brew a red ale (which apparently describes all of their beers). That is literally all of the information about their beers presented in the movie. More time is spent talking about issues with the water line, wiring, family, and credit card scanner. I know from Jacob's experience with Modern Times that this is pretty accurate in terms of the time spent on brewing tasks, but that doesn't make it interesting to watch. 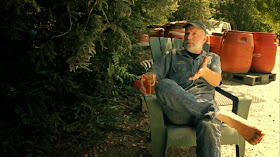 The secondary focus is on the brewers of St. Louis, brewing in the shadow of Budweiser. Urban Chestnut, 4 Hands, Schlafly etc. There are some interesting discussions about the differences between opening a brewery recently, and in the early days when the public was less interested in local beer.

Many other breweries are seen briefly. Always nice to see Jester King and some other fun Texas breweries. It seems like they must have recorded dozens of hours of footage judging from the variety of breweries visited and people interviewed. It was nice to see so many fresh faces. Moonlight’s Brian Hunt provided some of the more interesting perspective in the film. When the Vinnie and Natalie Cilurzo of Russian River, Jim Koch of Boston Beer, and Sam Calagione of Dogfish Head made their appearances, they were relatively brief.

Consistently the message of Crafting a Nation was that craft breweries are good for the economy and that buying local is the big reason. However, there really isn’t much about why the beer these brewers produce is better than macro-brewers. I think the movie may oversell the economics. As the percentage of craft beer by volume increasingly comes from large expansions by the top 20 craft brewers, the number of jobs per barrel of beer will decrease with economies of scale – 100,000 jobs at 5% of the market, doesn’t mean 500,000 jobs when and if craft beer reaches 25% of the market.

For me the advantage of craft brewers is that they can brew beers that suit the local palate, or a small subset of the population. They can use ingredients that are too scarce, expensive, or time consuming for larger breweries to utilize. They can serve beers either incredibly fresh or beautifully aged, which becomes more difficult the larger a brewery grows. These are the sorts of things this movie was missing. 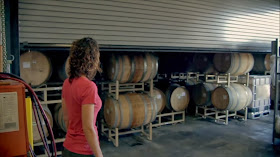 We see barrels at Russian River, but no discussion of what is in them, or why barrel-aged beer is interesting. No mention of the effort expended to fill and blend the barrels. There are lots of shots of brewing, but no one really talks about their process.

I’m unclear exactly who is the intended audience for this movie. It doesn’t seem like a movie that really tells you much if you are already invested in craft beer. I'm not sure there is enough there to convince someone who drinks only Bud Lite to change their buying habits. In many ways Crafting a Nation seems like a lobbying effort. There is no discussion of the final product, just the people who have taken financial risks to open breweries. There is a slight “government get out of the way” bent to several moments, but that isn’t the real focus.

I’m less interested in beer based on who brewed it, and more on the processes, ingredients, and results. If SAB Miller brewed beers that tasted as good as those from my favorite craft brewers, I’d buy them (I had no problem going out of my way a few weeks ago to sample four Bourbon County Stout variations from the AB InBev owned Goose Island). In terms of percentage, Boston Beer is closer to the global AB InBev production than a 17,000 bbl/year microbrewery is to Boston Beer. I think the biggest advantage of small breweries is their size, and as craft brewers continue to grow, they slowly lose that edge. 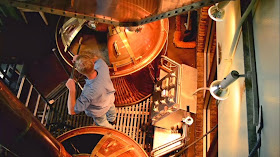 Even if the goal for the movie wasn't to spend too much time on of the nitty-gritty of production, I would have been interested to hear why these brewers chose to brew the styles/recipes they did. What inspires them? What did the brewers who’d succeeded wish they’d done differently? What about brewers whose breweries failed?

The movie is worth seeing if you want to hear a few personal stories behind breweries, just don’t expect to take anything away from it in terms of how to brew, or what to drink. I’m still waiting for a movie that really captures what craft beer is about, clearly beer needs to be a big part of that!
The Mad Fermentationist (Mike) at 6:04 PM