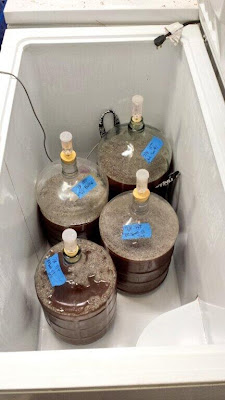 There are innumerable permutations when it comes to sour beer production. There are breweries that sour the wort, then ferment it with brewers yeast. Others ferment with brewers yeast, then sour it. Some breweries pitch all of the microbes together, while others stagger the various microbes over several months. There are breweries that pitch the same blend of microbes for every sour beer, while at the other extreme wild resident microbes in each barrel do the work. There are few instances where a souring technique is always either right or wrong, these are just variables that need to fit together. While I think Russian River and Cascade each produce some excellent sour beers, you couldn't take Russian River's microbes and Cascades process and produce beers as good as either of them does.

At Modern Times we'll be doing some "quick" sours produces by souring the wort before a brewer's yeast (or 100% Brettanomyces) primary fermentation. The first will likely be Derek's recipe for sour-mashed cherry gose. However, this post is about our more "traditional" barrel-aged sour beers. We're still in the microbe and barrel acquisition phase, but the wheels are turning. Last week I wrote four recipes, making some adjustments on the advice of Matt, Alex, Derek, and Jacob. I'll post more specifics on each as they are brewed.

Rather than simply buy a 30 bbl pitch of a microbe blend from a yeast lab for each batch, I've opted to grow a variety of cultures myself. A week ago I brewed the first 20 gallon microbe-starter batch. For that one I simply took a few old homebrew kits we had lying around the brewery, and added some pale malt to get the gravity up to 1.048. I pitched some American ale yeast to ensure a quick/healthy primary fermentation. The four carboys were dosed with White Labs Brett C, White Labs Belgian Sour Mix 1, BKyeast C1 Brett, and DCYeast DCY03 Brett(?).

Later this week I'm expecting another 20+ cultures (from Saccharolicious, East Coast Yeast, and Nick)... I'll pick up the Wyeast Lambic and Roeselare blends as well. If anyone has other suggestions for microbes, send them my way! Some of those will be grown on wort from Lomaland (our saison) to free up the pilot system for more interesting batches.

We'll also be starting cultures from bottle dregs (both commercial and homebrew). To make this easier, we ordered a pressure canner. This will allow us to always have small quantities of room temperature sterile wort on hand. That way we can grab microbes wherever we are. After the fermentation gets rolling, we'll step them up before pitching into a barrel. I'm specifically looking at American and Belgian beers fermented with cultures not easily available from a yeast lab (Jolly Pumpkin, Logsdon Seizoen Bretta, De Dolle Oerbier Special Reserva, gueuzes etc.).

Ideally I'd rather we had six or nine months for all of these cultures to start showing their true characters. That way we'd have a better idea of what we're pitching and which beer it is best suited for. After a month it will be impossible to tell exactly what we've got our hands on. We certainly won't pitch anything that tastes really off (nail polish, vinegar, huge sulfur etc.), but a Brett culture that tastes plasticy after a few weeks could be beautiful in a year. Luckily, using so many cultures we'll have lots of blending options. We'll also be mixing cultures, adding Lactobacillus and Pediococcus at the pure Brett cultures to ensure an adequate amount of acidity.

When we actually brew the beers we'll be completing primary fermentation in oak barrels (as traditional lambic brewers do). Most likely we'll use our house saison blend. I like a brewer's yeast strain that imparts some character on its own, providing esters and phenols for the other microbes to work with. California Ale, would be the only other in-house option. I'm still debating whether to pitch the microbes at the same time as the primary yeast, or use the cultures to top-off the barrels after the initial surge of fermentation is complete. When fermenting in impermeable glass carboys or BetterBottles, I've found a mixed primary fermentation really helps to boost acid production, but in my experience it is less essential in barrels.

Speaking of which, the plan is to use mostly wine barrels, although I wouldn't mind picking up some spirit barrels second hand from other breweries that have already run a clean beer or two through them. As with the microbes, I'd rather we had a wide variety of barrels to add further options for blending.We've talked to a couple barrel brokers, all I ask is that it's close enough that I can give the barrels a once over. Smelling them to knock out any with detectable off aromas.
The Mad Fermentationist (Mike) at 10:26 PM