Last week was the Craft Brewers Conference here in DC. I didn't attend, but I had a blast hanging out with people and drinking excellent beers. A few highlights:

On Tuesday night I spoke at a hop symposium at Smith Commons with a wide variety of other brewers and homebrewers. I had a good time, but the venue (loud) didn't lend itself to the sort deep intellectual back and forth I'd hoped for. I enjoyed drinking a glass of New Belgium Felix Love (their unblended sour base beer) for my trouble though.

Thursday I had the guys from Jester King (Jeff, Ron, and Jordan) over for dinner. We drink homebrew from Nathan and I alternating with their beer (including a test bottling of a sour with 200 lbs of raspberries in a single barrel - wonderfully jammy). Those guys are really killing it, so many interesting flavor combinations. We tried beers that melded Brett with hops, smoke, spices, plus interesting wood (Spanish cedar) and barrel (gin) treatments. We even discussed brewing a three way collaborative beer with them, Right Proper, and Modern Times!

On the way to drop Jacob (Modern Times' Founder) off at the airport on Saturday we stopped for lunch at Meridian Pint. There we sampled Nathan's first two commercial batches of WildCraft soda and a few of the many local collaborative beer they had on tap. The most interesting of the beers was Barleyweisse, a recreation of a pre-prohibition sub-3% all-barley "Berliner weisse" that Mike Stein found a reference to in an obscure book about the history of brewing in Maryland (this batch was brewed with Meridian Pint's Tim Prendergast at Union Craft Brewing).

With Modern Times getting a day closer to opening every day, the "actual" brewers have taken over brewing the test batches of clean beer (I'll get to brew more sours again, thank goodness!). Jacob brought along bottles of three of their test batches for me to taste. But before I get to the notes and recipes I need to talk about the Kickstarter campaign!

Over the last year plus, hopefully you've enjoyed following my role in the Modern Times recipe development process. The grand opening is starting to feel like it's right around the corner, the recent arrival of the brewing system was the latest hurdle crossed. Jacob did a stellar job creating incentives for the campaign. The clothing looks terrific, and the League of Partygoers & Elegant People should be a great way to get involved if you are local (including first notification when bottles of sour beers go on sale at the tasting room). There are also some eccentric rewards including getting a velvet portrait commissioned of you for the tasting room, a Christmas light tour with one of the brewers, and joining me for a test-batch brew day in DC! The money will be spent to pimp the tasting room and for two things near and dear to my heart, barrels to age sour beer and lab equipment to ensure those microbes don't cause a problem for the clean beers!

Now back to the test batches. They were brewed by two of the brewers. Alex Tweet was previously at Ballast Point, where he developed some weird/delicious beers like Indra Kunindra (he also recently let me know that his first batch of homebrew was based on one of my recipes). Derek Freese was previously the brewer at Monkey Paw (and before that an avid homebrewer). I got to hang out with Derek and drink a few of his beers while at GABF last year. I came away impressed by both by his knowledge and enthusiasm for brewing, and by what a fun guy he is. Looking forward to working with them (and with the head brewer, Matt Walsh, as well). I'll do my best to keep you updated of continued progress on the recipe front as they are brewed! 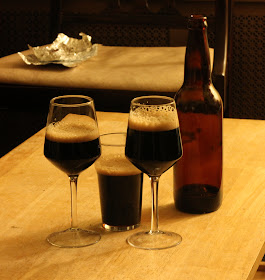 In one day they brewed three variations on this recipe. This was picked as the clear winner by the executive tasting panel, so it is the one Jacob brought out.

1.75 oz of crushed coffee steeped for 24 hours before bottling.

Smell – More coffee and chocolate than my most recent version. Could go back to 2 oz of coffee for 24 hours for more “wow!” 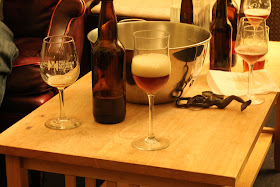 With the fourth attempt overall at this recipe I think we've finally hit upon a winning hop combo. Nelson Sauvin and Simcoe have been there all along, but we tried them with three hops, Palisade most recently, without nailing it. It seems that Mosaic did what the others couldn't!

Appearance – Could be lighter, although just slightly. Might just be a clarity issue.

Mouthfeel – Fuller, sweeter. For the next batch we'll either add a small amount of sugar, or reduce the Munich and mash cooler.

Drinkability & Notes – Really damn close to perfect other than the body/sweetness which should be a simple fix. 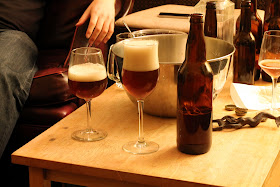 Jacob was able to procure a lot of 2012 harvest Simcoe so he wanted to see how the malt bill from this recipe would handle the switch from Cacade/Sterling to all Simcoe. The other half of this batch saw an accelerated 24 hour dry hopping on a Stirhog Black Maxx Stir Plate. Apparently the aroma was fine, but the vigorous agitation extracted some unpleasant polyphenols or tannins from the hops.

Appearance – Not as bright/red as previous batch, this one is a bit duller/browner. May just be a clarity issue.

Smell – Big pine/tropical Simcoe, not much else. Bright, fresh, not green or grassy. Very nice.

Taste – Could be stickier, nice hop character, solid bitterness. Malt comes through more than in the nose.

Mouthfeel – Good carbonation but it could be a little fuller.

Drinkability & Notes – Happy with the direction this is headed. I just worry that the Simcoe overwhelms the malt. We just need to figure out how “IPA” we want this one to be.
The Mad Fermentationist (Mike) at 8:08 PM