My Book has a Publisher!

When I started writing a book more than two years ago the goal was to collect my thoughts on brewing sour beer and self-publish it through Amazon CreateSpace. I wanted to pull together all the tips, techniques, and science I’d learned over the years of blogging/brewing into a single resource. I assumed it would take a year at most…

As I wrote and edited I decided it would be helpful to talk to a few other brewers (both craft and home). The generosity of the people I contacted overwhelmed me. Virtually every brewer I wanted to talk to answered my questions, although occasionally it took a bit of nagging.

A list of some of the people I talked to for the book:

In November, 2011 I emailed Kristi Switzer the Publisher for Brewers Publications and ended up talking to her on the phone. A few weeks later I submitted a proposal. A proposal consists of answers to questions about the book: target audience, content, author qualifications etc. In addition I submitted the table of content (draft table of content you can actually read), a sample chapter, and a writing sample (one of my BYO articles). I signed the finalized contract last week!

For awhile I was quite torn on if a publisher was what I really wanted. Self publishing held the allure of complete control over the process and end result. The ability to revise and update as I saw fit, not to mention about 10 times more money for each copy sold. However, the legitimacy conferred by having a publisher, and their expertise on editing, layout, publicity etc. was enough to convince me that Brewers Publications was the right choice!

Brewers Publications is the publisher of just about every book about brewing you own (from How to Brew, to Radical Brewing, to Wild Brews etc.). It is a wing of the Brewers Association, the organization that runs the Craft Brewers Conference, National Homebrewers Conference, Great American Beer Fest, Zymurgy Magazine etc. This will open up opportunities for me to speak and promote the book.

July 1st is my deadline to submit the completed manuscript, however don’t expect to be able to buy a copy of the book in August. As a small publisher, they only aim to release two books a year, and at the moment mine is slotted for sometime in 2015. However, Kristi assured me that if there was an outpouring of demand (or another book had to be delayed) mine could move up. Contractually they are bound to publishing the book within three years of when I submit the manuscript.

The bulk of the writing for the book was completed by six months ago (currently sitting at 140,000 words all told). I’m still waiting for the last couple brewers to review their sections and submit their comments/edits. Otherwise I’m working hard to fact check and cite what I have already written. Luckily for me, Audrey weirdly enjoys formatting references (one of my least favorite aspects of the process). 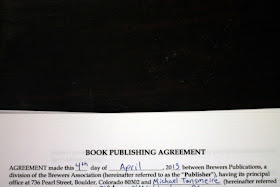 I apologize to everyone who was hoping the book would be published by now, but when it is finally released hopefully it will be a valuable reference for years to come. It seems like American sour beers are starting to really take off (when was the last time a brewery opened without plans for some sort of sour program?). I’m hoping my effort will produce a book that both professional brewers and homebrewers will benefit from. Something that is simple enough to help you brew your first batch of sour beer, and detailed enough that brewers who have been making sours will take away information and inspiration.

Thank all of you for your support you’ve shown the blog (me) over the years! The comments, emails, not to mention beers and microbes, you've sent have kept me honest and inspired many research tangents. The blog might be a bit lean on sour beer content for awhile to avoid stealing stuff from the book, but I’ll do my best to post updates about the Modern Times sour beer program (something that probably will not find much coverage in the book). There are many similarities in the book and the brewery, in both cases I am giving up control to work with people who really know what they are doing, and who have the funding to take my ideas and turn them into something wonderful (hopefully)!
The Mad Fermentationist (Mike) at 7:46 PM