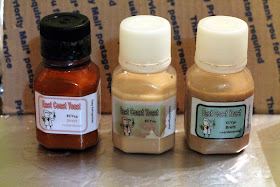 The nomenclature used to sell Brettanomyces can be confusing and can sometimes a bit misleading. Currently essentially all of the Brettanomyces strains used in brewing belong to just two species, B. anomalus and B. bruxellensis. Like Saccharomyces cerevisiae (brewer's yeast) there is a large amount of variability between different members of the same species.

Rather than using some other naming convention (e.g., origin, brewery, sensory etc.), in the case of Brett, two older species names (B. lambicus, and B. claussenii) have stuck around as strain names even though they aren’t used scientifically anymore. When you see a strain marketed as B. lambicus it is B. bruxellensis, while B. claussenii is B. anomalus. However, I think it is more helpful to talk about the individual strains. For example, Wyeast and White Labs both sell “Brettanomyces lambicus” but these two strains produce very different flavor profiles.

Notice earlier that I didn’t say that bruxellensis and anomalus are the only species of Brettanomyces? Bug guru Al Buck of East Coast Yeast has been feeding me information for my book about three other species he has obtained samples of. A few weeks ago vials of B. nanus, B. naardenensis, and B. custersianus arrived in the mail. Al’s given me a wide range of flavor descriptors for each (some more positive than others), but I wanted to try brewing with them for myself. 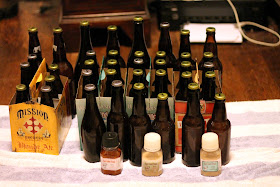 A few weeks ago I pitched a few drops from each vial respectively into a quarter of the bottles of Lomaland #2 saison to see how each performs as a secondary fermenter. The technique was similar to what I have done in the past to trial a variety of Brett strains. I’ve opened a few of these bottles already, and so far the Brett character has been unsurprisingly too subtle to describe.

This past Sunday I brewed 7.5 gallons of wort that I split three ways to try these strains out for primary fermentation. The recipe was very simple, sharing many similarities with both the first 100% Brett beer I brewed, and the Russian River Redemption inspired single our barrel crew soured in a red wine barrel. The small amount of acid malt was to reduce the mash pH, and to provide the Brett with lactic acid for the production of the fruit ester ethyl lactate.

The results of these two experiments should give me a decent understanding of the characteristics of these three strains. However, regardless of the results, I won’t be able to make any blanket statements about the suitability of these species for brewing. Even knowing everything about a single isolate isn’t enough to know how other isolates of the same species will behave. Hopefully I'll have the results from both trials in about two months. 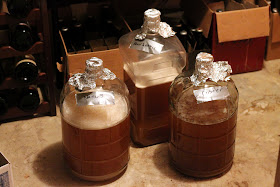 Collected 9 gallons of 1.044 runnings. Very clean wort, left most of the trub behind. Chilled to 70 F.

Split into three 3 gallon fermentors. Shook to aerate. Pitched ~80% of the ~2 month old ECY Bretts. Left at 60 F to ferment. Decent activity by 24 hours on Nanus and Naardenensis, Custersianus took an additional 12 hours or so.

9/25/13 Tasting notes for the B. custersianus portion. Nicely fruity, won out over a saison finished with the same strain.

9/30/13  Tasting notes for the B. naardenensis portion. Surprising amount of acidity, but the overall flavor wasn't great. Al suggests that it gets fruitier around six months, so I'll update if things change.

10/9/13 Tasting notes for the B. nanus portion. Poor attenuation led to excessive sweetness, but the strain provided a big white grape juice nose. Interesting, but not great.
The Mad Fermentationist (Mike) at 8:09 PM