Wyeast 3711 French Saison is simultaneously maligned and celebrated. It is probably the easiest saison strain to work with, fermenting rapidly and completely regardless of wort fermentability and fermentation temperature. However, it can be over-attenuative, and the flavor tends to be fruitier than the Belgian saison strains. For this beer (my second test batch of Modern Times Lomaland) I kept the temperature lower than I would for something like Saison I, and I avoided stressing the yeast (I didn’t under-pitch or under-aerate).

Not saying that Modern Times definitely will or won't use WY3711 for Lomaland, the West Coast division had great luck with the Dupont strain, and is also putting a blend of White Labs Saison II and Saison III through its paces. Our Kickstarter campaign is down to less than two weeks. There are still two brew days with me available on the Modern Times pilot system, and just seven  League of Partygoers & Elegant People memberships (your best shot at drinking my first batches of commercial sour beer)! 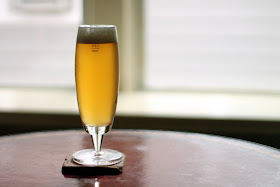 Smell – Solid yeast presence, fresh bread dough, and white pepper. Some fruit, but the restrained fermentation temperature kept it from being a fruit-bomb in the way 3711 sometimes is. The classic Saaz hop herbal-spice comes through complementarily.

Taste – Dry, but not desiccating. The yeast, especially the pepper carries through the flavor. Very fresh tasting, Solid bitterness in the finish, but it isn’t rough or harsh. The lingering flavor is yeasty/doughy/wheaty. Slight tartness. Not hugely complex, but it has all the elements I want in a saison.

Mouthfeel – The body isn’t as thin as you’d expect, but it isn’t thick by any stretch of the imagination. Solid carbonation, but I would expect more from a bottled (or canned) saison.

Drinkability & Notes – For such a simple recipe this beer has a lot going on. The nose could be a bit more complex, but considering the moderate gravity and mono-culture fermentation it is hard to complain too much. I’m excited to see how the half of the batch that was bottled with Brett turns out!
The Mad Fermentationist (Mike) at 7:19 PM