The series of four clean barrel–aged beers I’m working on has been a lot of fun so far, but it has also been slightly stressful. Considering their extended aging, trying to keep these beers squeaky clean with all of the wild beers I brew has been my top priority. So I bought a fresh round of post-fermentation gear, passing down the old plastic to my sours. I bought two new buckets, one for bottling and one for storing/sanitizing gear. My dual use buckets always seemed to end up with a ring of scratches around the bottom from the sharp plastic on the tips of bottling wands, auto-siphons etc, creating good places for microbes to hide. I’ll also be bottle-conditioning all of these beers (who wants a five gallon keg of Whisky Barrel Trippelbock?), a challenge as they are all pushing 10% ABV.

This Imperial Porter was loosely based on and inspired by Birth of Tragedy, which I drank a glass of during my visit to Hill Farmstead over the summer. Both are strong dark beer subtly spiced with cinnamon, and vanilla. Shaun aged his in bourbon barrels, while mine is currently resting in a second use barrel that held Rumble (distilled from figs, demerara, and honey). 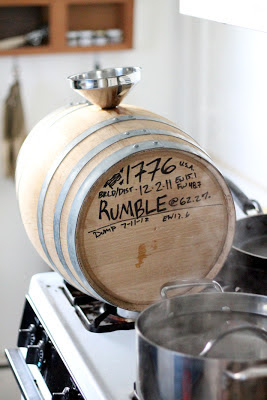 The base beer for my batch is essentially a scaled up version of the Coffee-Oatmeal Stout I’ve been dialing in for Modern Times. It relies on lower color dark malts than those used by most brewers, so I was able to load them in without too much concern about creating a harsh/burnt flavor. I’d grown bored of pitching American ale yeast for so many batches, so I made the switch to Irish Ale (which I really liked in the Scandinavian Imperial Porter I brewed a few years ago).

When I tried to pull my first sample of the Quad that was sitting in the Rumble barrel originally, I discovered the bunghole on the 20L Balcones barrels are just barely wide enough to accommodate a standard auto-siphon. It takes some tilting and pressure, but it pops in eventually. However, it is easy to knock-off the cap while pulling it back out through the hole. So when drawing a sample it may be best to leave the cap off.

The Quad was oaky enough for my tastes after just 22 days, so I bottled it yesterday. Before refilling, I rinsed the barrel with three changes of just-off-the-boil filtered water. If you attempt this, be careful as filling the barrel with hot water, bunging, and shaking generates a decent amount of pressure, so crack the stopper slowly and away from yourself. A hot rinse will remove most of the spent yeast from the barrel, hopefully enough that any Belgian yeast will not affect the cleaner yeast character of the porter. I allowed the barrel to sit for a few hours to cool before refilling to minimize foaming.

Being the second fill, the Imperial Porter should benefit from a bit more time in the barrel; I’m guessing it will take four to six weeks. When the oak character approaches where I want it, I’ll split a vanilla bean and add it along with a few grams of cinnamon. I’m still debating whether or not to add coffee (which Birth of Tragedy had); if I do, it will be whole beans for a couple days right before bottling. I want to taste the character of the barrel-aged and spiced beer before making a decision, there will already be so many flavors flying around that I don’t want to disrupt the balance. 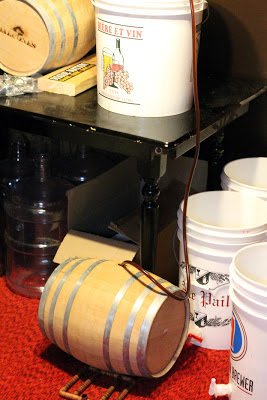 10/21/12 Racked to the triple washed (just-off boiling water) Rumble barrel. Filled to the brim, no vanilla or cinnamon yet.

11/25/12 Added 2 grams of ground Penzey's cinnamon and one split vanilla bean, soaked in half a cup of just off the boil water for five minutes.

5/1/13 The residual Belgian yeast ended up drying out the beer to 1.016 in the bottle, resulting in it being considerably over-carbonated. Otherwise pretty pleasant.
The Mad Fermentationist (Mike) at 5:42 PM