I grew pretty attached to our first group barrel. It started its life aging Virginia Gentleman at A. Smith Bowman. The first beer we aged in it was a Wee Heavy, but when that grew slightly tart we added bottle dregs and rolled with it to terrific results. The stoutish-porter that went into the barrel next (and then onto sour cherries) reach the mini-Best of Show at the final round of the 2012 NHC. The third beer in, the Americanized oud bruin I’m sipping now, was the last group beer in it before we purchased a fresh barrel from the same distillery (which is currently aging a Brett lambicus spiked barleywine).

The original bourbon barrel developed resident microbes that provided a wonderful tartness, even in strong beers, without producing an overly dry or funky character. The beers aged in it share a lot of similarities with those of Cascade Brewing. Nathan eventually refilled the barrel with a mega-batch of his Vin De Céréale, a gigantic Flemish red inspired by a difficult to find Rodenbach brew. I’m sure the barrel will eventually find its way into his stable at Right Proper and lead a long and happy life. 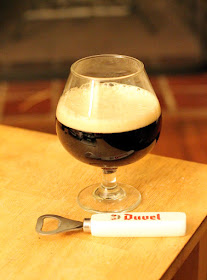 Appearance – Pours with a dense light-tan head. It has decent retention, especially for a sour beer. The body is dark brown, but it appears clear with red highlights when held to the light. Very pretty… for a brown beer.

Smell – There was half a second when I initially smelled the snifter that I thought I might have opened one of the bottles that had aged on cherries, nope. In addition to the red fruit, the vanilla from the oak comes through (even on the third turn of the barrel). It doesn’t have that musty aroma that classic aged-out oud bruins like Goudenband have, much fresher and brighter.

Taste – Bright, but not overpowering lactic sourness. Wonderfully snappy, without a hint of acetic harshness. Very cherry-forward, fresh and bright. The fruitiness goes well with the American oak, I won’t say I get bourbon, but certainly a bit of sweet vanilla. The beer still has a decent amount of sweetness, right for a malty sour beer like this.

Mouthfeel – Just slightly prickly, about right for a big/dark sour. Plenty of body left to balance the acidity. I may have to culture the microbes from a bottle of this to start my five gallon liquor barrels when I am ready to take them sour.

Drinkability & Notes – Hard not to like this rounded, complex, sour brown ale. I’m really excited to see how the half that aged on sour cherries it doing… bye.
The Mad Fermentationist (Mike) at 8:29 PM