Not every new idea is a good idea. Adding oats to the boil of the first iteration of the Coffee Oatmeal Stout resulted in a nice oat-aroma, but the mouthfeel lacked the silky/oily texture that a hearty stout demands. For this second batch, my primary alteration to the recipe was a switch from half of a pound of oats added to the boil, to two and a quarter pounds in the mash. 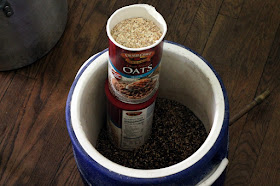 In addition to changing the way and amount of oats that were added, I also switched the type of oats. Flaked or rolled grains, which are steamed, don’t make a big flavor contribution compared to grains that have been roasted or toasted as a result of Maillard reactions. Initially I planned to toast the rolled oats in my oven (as I did with my failed Oatmeal Cookie Brown Ale), but Jacob suggested buying commercially toasted oats to avoid the task of toasting ~400 lbs ourselves every time we want to brew a 30 bbl (930 gallon) batch. A quick online search turned up Country Choice Oven Toasted Quick Oats. It turns out that these oats are rather lightly toasted, not much darker than the usual Quaker Oats, although they do have a slight oatmeal-cookie aroma. It will be interesting to see how much of that comes through in the finished beer. 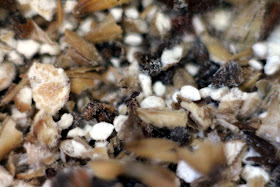 Other than the changes to the oats, the rest of the recipe received just a few minor tweaks. A slightly higher gravity, and more bitterness to match. I added more CaraMunich and chocolate malt, to complement the higher gravity. I also pitched S-04 because I didn’t have time to make it to the homebrew store for a pack of WY1968. Although that may not be a problem again since a new homebrew store recently opened just a few blocks from my house (in what will be the tasting room of 3 Stars Brewing).

I'm amazed how much character we got from two ounces of coarsely crushed coffee beans in the first batch. If anything the perception has grown more potent as the beer sits on tap. Rather than reducing the amount of coffee for this batch, I am planning on shortening the time spent in contact with the coffee beans (24 hours instead of 36). This beer may yet need another rebrew or two, but if the sample I pulled after a week of fermentation is any indication, we may be down to subtle tweaks (like coffee variety).

Some video from the brew day of the first oatmeal stout made it into a short documentary about the DC Homebrewing Scene (as well as some passion about the topic from Nathan, Thor, and myself).

Slow sparge, should have picked up some rice hulls... runnings looks a bit milky at first, but cleared up eventually. Still collected gallons of 1.052 runnings from a double batch sparge (didn't drain entirely due to the slow runnings).

Added one 5 ml HopShot of hop extract for bittering. Not much of a hot break.

8/9/12 Really close to my ideal coffee oatmeal stout. Could be a bit thicker, and slightly lighter on the coffee aroma though.