I’ve never been an equipment-nerd brewer. Yesterday I brewed a batch of coffee-oatmeal stout using the same mash-tun I used for my first all-grain batch seven years ago (although I recently replaced the original tubing that runs the wort from there into the kettle). I use my original kettle to heat sparge water, and my second kettle, only a few months newer, is still in service. Same goes for the copper-coil immersion chiller I built, although I now have a recirculating pump that I use with ice water to chill the last few degrees. It is appealing to keep using the same equipment because I know how to hit my numbers, I trust it. However, recently I’ve made a few changes that are making other aspects of my brewing process more efficient. 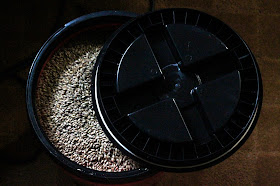 I’ve used hydrometers for measuring runnings and gravity since I started brewing. They are usually pretty accurate (although I always check a new one in water first), but they can be a pain to use because the sample needs to be cooled to take an accurate reading. This delay makes it more difficult to hit a target OG, or keep an eye on the gravity near the end of a fly sparge. I grabbed a refractometer, the advantage of which is that it only requires a few drops of hot wort to take a gravity reading. The dropper can suck wort directly from the kettle and dispense it onto the main prism, flip down the daylight plate, and look through the eye piece to read where the border between blue and white falls on the scale. Refractometers can be used for final gravity readings as well, but the presence of alcohol requires a conversion formula (and honestly I am happy to have a sample to taste after I take a reading). 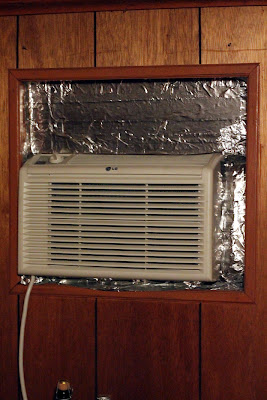 Grain storage is another one of those things that I’ve been meaning to improve for awhile. Most of my base malt, bought in bulk from North Country as part of a group buy, has been stored in a few large bins that probably aren’t as air-tight as they should be. The buckets I do have are sealed with snap-on lids that can be tough to remove. I’ve never had issues with bugs or rodents, but it is a concern. The last time I was at Home Depot they were selling five gallon HDPE (food grade) buckets for $2.50 and Gamma-Seal lids for $7.00. The adaptor ring has to be knocked onto the bucket with a mallet, but after that the lid screws on/off easily. I bought four initially, but for less than $10 per I’ll be getting a few more sets.

Initially I was pretty lazy with the insulation around the window air conditioner I installed in the basement “cold room.” The window frame is so small that I had to remove the tilting window completely to get the air conditioner into place. I used Styrofoam and bubble wrap to insulate around the unit. It worked alright, but it left some gaps and didn’t look great. Last weekend I finally bought some one-inch foam insulation board, cut two layers to fit, and then sealed the whole thing with foil tape. Hopefully this will cut heat loss in both the summer and winter. 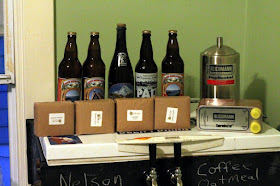 While those three improvements are to peripheral gear, I’m also slowly working on upgrades to my core brewing rig. My first paycheck from Modern Times Beer arrived a few weeks ago in the form of a Blichmann Therminator and HopRocket (along with some awesome West Coast beers - Alpine Duet/Nelson, and Logsdon Seizoen Bretta, plus the not so awesome Karl Strauss CBC Sypsoium DIPA). An inline chiller and hop-back will give me another way to infuse hop character into my aromatically hoppy beers, and a faster way to chill wort in general. Exposing hot wort to hops briefly before immediately chilling extracts highly volatile aroma molecules that are driven-off during a traditional late-boil addition. Sadly my tap water is pretty warm during the summer (72 F yesterday already), so I may need to rig up a multi-stage chilling system to use them this summer. Having to assemble and sanitize the additional equipment will require more diligence during the boil, but it is a good excuse to finally start using the March pump I bought a few years ago.

No matter how good your golf clubs are, unless you practice using them you won’t hit the ball where you are aiming. Homebrewing is similar, an experienced brewer can produce good wort on pretty much any equipment, but it may not be quite as repeatable or polished as it would be with more advanced gear. With the test batches I am brewing, being able to generate repeatable results has become more important for me than it was in the past. Hopefully the new gear won’t cause a temporary setback while I learn how to adapt my process to them.
The Mad Fermentationist (Mike) at 6:39 PM