One of the things I hate most about bottling, is bottle conditioning. Having to pick a target volume of CO2 at bottling and then rely on the yeast to get there. I’ve had a handful of over-carbonated batches during the last few years. A couple were the result of Brettanomyces (or other) contamination, a couple my fault for adding too much priming sugar, and one batch I did a poor job mixing the beer with the priming solution.

In the case of this parti-gyle (combined grist brewing) English ale I have no idea what caused the excess carbonation. The beer tastes clean after four months in the bottle at cellar temp, so maybe 15 days was too quick to crash chill the beer (although White Labs Yorkshire Square, is supposed to be quick to reach its attenuation limit and then flocculate). The gravity on the small portion dropped from 1.009 (80% AA) at bottling in February to 1.006 (87% AA) today, a good illustration of how little fermentation it takes to over-carbonate a batch (and surprisingly high attenuation given the strain's usually low attenuation). It could be that somehow another brewer’s yeast strain got into the culture, who knows? 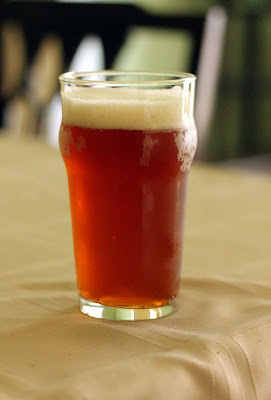 Appearance – Right out of the fridge this brown-amber ale has significant chill haze. As a result of excess carbonation I’ve had to keep and pour both of these beers much colder than I usually would for English ales. The moderate white head stays for a few minutes, but falls apart relatively quickly.

Smell – The most prominent aroma is the distinct slightly burnt-toast character of brown malt. A bit of English yeasty-fruit character comes out as the beer slowly warms in the glass. English yeast fruitiness tends to not be as distinct as say the banana in a hefe weizen, but in this case it is somewhere around fresh red apple. Not much going on, but what is there is pleasant enough.

Taste – Like the nose, the flavor is relatively straightforward. English yeast, along with toasty and bready malt. Minimal hop bitterness, but there is hardly any sweetness to be balanced. The finish is long and slightly minerally, a nice boost to the complexity. From the malt bill I was expecting more caramel.

Mouthfeel – Starts with too much carbonation, but given 15 minutes to warm up and degas it isn’t annoyingly high. Still tastes a bit thin despite the oats, which is probably a result of the high attenuation and the fact that it is mostly second runnings.

Drinkability & Notes – Overall a relatively clean session-y ale. Pleasant enough, but the excessive carbonation does detract from my overall enjoyment. I do enjoy the flavor of brown malt, but I might back down on it slightly if I brewed it again. 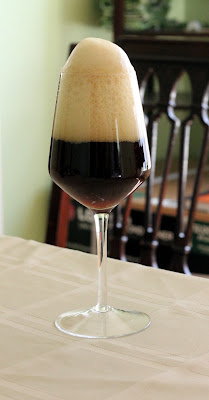 Appearance – Pours with a dense light-tan head about four fingers thick… that proceeds to grow to six fingers thick, protruding in a mound above the rim of the glass. The opaque brown body hides the haze better than the smaller beer.

Smell – Big nose of brown sugar, caramel, baked figs, vanilla, and a bit of alcohol heat. It almost smells like it spent a month or two in a rum barrel. It is amazing to think that these two beers, with such different aromatic profiles, came from the same mash and were fermented with the same yeast.

Taste – Sadly the flavor no longer has the sweetness to support the intensely complex aroma. The dryness leads it to almost taste more like a Belgian dubbel, intense malt-fruitiness, but without the sweetness of a strong English ale. Like the lower gravity portion of the batch there is nothing seriously off about it, but the high attenuation has disrupted the balance.

Mouthfeel – Similarly over-carbonated (if that massive head wasn’t enough of a clue). The beer comes across as thin and a bit seltzer-like.

Drinkability & Notes – I like this half more than the small beer, but the excessive carbonation means I won’t get to hang onto it to see how it changes over the next few years. I may have to brew something similar again to see the result with proper carbonation.
The Mad Fermentationist (Mike) at 8:08 PM