What beer serving method is best? 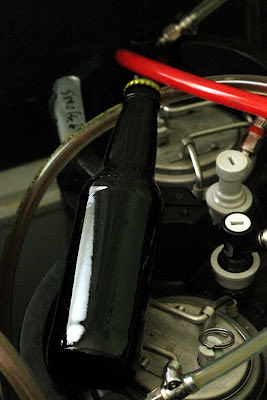 I think the answer to what is the best serving method for beer is so much more complex than my simple poll allowed. Expectations differ by the type of beer, where I am drinking, and the brewery. I think each method has times when it is the best and the worst.

When the right beer is served on cask, and it’s done correctly, there are few better drinks. However, too often in America casks are served by bars that don’t treat them correctly. My primary complaint is that casks are served too warm; there is a big difference between cellar, and room temperature. Other problems include murky, oxidized, or otherwise off tasting beers being served on hand pump and gravity pour. Not many breweries have large cask programs, so many bars around here are desperate for beers to put on cask. The result is that many have styles on that don’t benefit from the serving method; I once had a weizenbock on cask at a local bar, bad choice. Imported beer on cask are always a risk; English milds and bitters rarely travel well. The only time I order a cask is if it is a local moderate alcohol beer or at a bar that takes their casks seriously.

Draft beer tends to be the most consistent since it is usually stored cold and sold relatively quickly. However, they have their share of problems as well. Many bars only have a single serving temperature, which tends to be too cold for most beers. I really respect a bar that can keep their draft list tight and well chosen rather than having 50, 75, or even 100 taps. The more handles you have the more likely it is that some of the kegs will sit around for too long. Off-flavors from poorly cleaned lines are a big problem, although it seems like, at least here in DC, beer bars are taking the quality of their draft beer more seriously. When buying a draft, I usually go for IPAs and other beers that are best fresh. I also am a big fan of small samples, a chance to try an interesting beer without investing in the now universal bomber.

The thing I really like about bottles is that many breweries indicate on them when the beer was packaged (I hate best buy dates, seriously a year for Pilsner Urquell?). However, many brewers' bottles still do not have this basic piece of information. Bottles have a tendency to sit around too long, especially at places with extensive selections. A deep bottle list makes much more sense for liquors, which can sit indefinitely. Like drafts, I would like to see a well chosen and frequently moved beer list, especially of things that need to be served fresh. No problem having a big backlog of stouts, strong Belgian beers, sours and others that have a long shelf-life, but don’t carry 15 IPAs in bottles on top of a deep draft list.

This is all to say that what I choose to buy and drink is highly situational. In most cases I avoid bottles when I am out because I can generally buy the same beer at a store for less than half the price (and take a look at the bottling date before I buy). There are also some breweries that just do not have their bottling where it needs to be. A beer is fine on draft, while bottles are infected or have carbonation issues.

For my homebrew, I try to keep the beers in my kegerator restricted to only those that are best consumed quickly and in quantity. I bottle anything that will not be harmed by months or years of aging. The rare occasions I put beer on cask it is for parties when I know we’ll be able to work through the large quantity of beer in a reasonable amount of time.

The Mad Fermentationist (Mike) at 6:38 PM