I tend to deflect most requests to brew a batch of beer for someone else’s event. So little of the cost of a batch is the ingredients, the real expense is the time and effort I spend both in brewing and planning. However, I’ve made a couple of exceptions recently. First there was the parti-gyle (should I say "combined grist brewing" as Ron Pattinson suggested in the comments) English Oatmeal Porter that I brewed with my friend Nate. However, I ended up with close to five gallons between the two batches, so not exactly an act of charity. 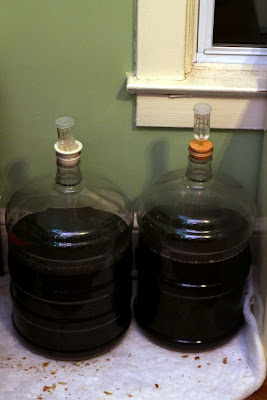 A few months ago I bumped into my neighbor Dan. He remembered that I was a homebrewer and offered to start rinsing and saving empty bottles for me. Dan homebrewed while he was a grad student, but hadn’t made a batch since getting married, leaving grad school to become a reverend, and having kids. He hasn't lost his interest in good beer though, he and the reverends he works with hold weekly meetings at Pizzeria Paradiso (one of the three or four best beer bars in DC). It was at one of these meetings while planning their annual Easter Vigil that they struck upon the idea of brewing a batch of beer to serve to the several hundred attendees.

I kicked a couple of ideas around with him over email. My assumption was that they’d want something light and accessible for such a big group, maybe toss in some biblical spices? A couple weeks ago he and one of the other reverends came over to drink a few homebrews and plan the recipe. Dan and Tommy were especially intrigued by my Sour Cherry Bourbon Porter. In the end they decided on a Pomegranate Cardamom Quadrupel. We chewed on a couple malts, their favorites were CaraMunich, for dark fruit flavor, and just a touch of Carafa Special II, for darker roasted coffee aromas. Pomegranate is one of the few fruits mentioned in the bible, which is why He’Brew uses it in their beers so frequently. It is also suspected of being the fruit that Eve ate from the tree of knowledge (apples were unknown in the dessert of the Middle East).

I realize religion is beyond this blog's usual purview, so I apologize. I was raised Catholic, but haven’t been a religious person for the last ten years or so. Oddly I don't have a particular memory of losing faith, it was a gradual erosion until one day it was the only honest choice remaining. However, unlike many atheists, I still think that religion can be a force for good in the world, although that certainly isn’t always the case. My central concern is that having faith in something (including, but not limited to a god) makes a person an easier target to be taken advantage of or misled. That said, faith also makes it easier to convince people to help others or sacrifice for the benefit of society. Reverend Dan seems like the sort of person who is doing things the right way. In the hours we spent together brewing, he didn't ask me about my beliefs or suggest that I come to his church. When several of his young kids came across the street for awhile to watch the brewing, they were well behaved and inquisitive about the biology of fermentation. 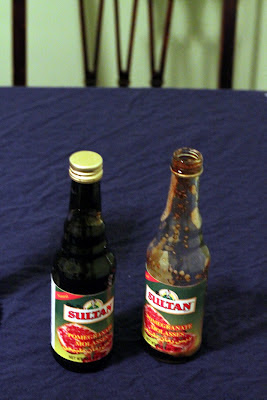 After a standard mash and boil, at flame out we added a small dose of white cardamom. Not to be confused with the smoky turpentine notes of the black cardamom that Noah, Alex, and I used in the second iteration of our annual Dark Saison. White cardamom is most often associated with Scandinavian baked goods and coffee (previously I also used a pinch in my Scandinavian Imperial Porter). It is always easier to under-spice, and add more later rather than risk adding too much. For yeast we used the Belgian strain from the Westmalle Trappist Abbey, White Labs 530, naturally. The pomegranate flavor was contributed by tart, raisiny pomegranate molasses that Dan's wife procured from a local Turkish market. We added a total of one pound split between the secondary fermentors. Hopefully it will be enough to add a slight tartness, à la Ommegang Three Philosophers.

My payment for the time and effort will be a six-pack taken from the batch at kegging. Talk about a selfless act, especially considering how good the sample we pulled tasted!

Batch Sparged with 180 F water. Collected 9 gallons of 1.092 runnings including 2 lbs of table sugar added to the boil, plus 1 gallon of final runnings (boiled separately on the stove).

.5 grams of ground white cardamom added in the last few seconds of the boil

Chilled to 67 F, 60 seconds of oxygen for both halves of the wort. Pitched half the starter, not decanted, into each half. Left at 63 F to ferment.

3/1/12 Added 10.6 oz of pomegranate molasses to one carboy and 5.3 oz to the other. Added one gallon of distilled water between them to top-off to the target volume.

3/22/12 Kegged, the half with more syrup had more trub. Good flavor, hint of sweetness and tartness.

Dan said the beer got excellent reviews at the Easter Vigil, glad the beer was ready in time!

7/23/12 The bottles ended up a bit over-carbonated, but otherwise the beer is very good. Fruity, spicy, slightly tart. Substantial, but well balanced.
The Mad Fermentationist (Mike) at 6:55 PM