What is the most you have ever paid for a bottle of beer? 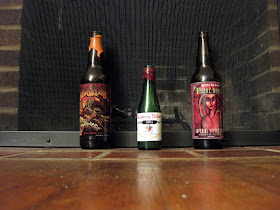 I'd be interested to hear what people's most expensive bottle was (and was it worth it?). Mine was a ~$65 magnum of BFM Abbaye de Bon Chien Grand Cru, although considering they are now selling 375 ml bottles of it for ~$25 the price I paid was a steal.

It is great that despite the poor economy, consumers are rewarding breweries who are willing to brew batches that are less more interesting, experimental, and even a little weird. While as a homebrewer most of my costs are for ingredients, fuel, and equipment, these really aren't the driving forces for commercial breweries when it comes to the more interesting batches. Breweries tend to be more focused on the time beers take to ferment and age in the tanks. A strong beer that takes six weeks before packaging needs to make as much profit as three batches of a beer that take two weeks to ferment (to make economic sense).

Time is the biggest cost of sour and funky beer production, having the space in tanks or barrels to age them before packaging. However, there are a few breweries that are working hard to make interesting sour beers with aging times that are not that much longer than a standard batch of beer. Jolly Pumpkin leaves some of it beers in barrels for as little as two weeks for example. I talked to Chad Yakobson of Crooked Stave over the weekend, and he is doing a lot of interesting things with 100% Brett fermentations with his Wild Wild Brett series (can't wait to see what he does once he has his own space). If anyone hasn't seen it his presentation on Brett from the 2011 NHC it is well worth the hour (here are the slides, and the first of the videos).

We are still early stages of the adaptation of the classic European methods to suit modern breweries and American tastes. I think there are going to be some amazing beers coming out in the next few years as brewers continue to learn and increase production. Sadly, I think we will also be seeing more top-shelf beers regularly pushing into the price category previously reserved for fine wines. The same way the 3 Fonteinen is releasing the Armand’4 season gueuzes, I suspect that more brewers will take their best batches, blends, or barrels and give them limited release packaging and big price tags.
The Mad Fermentationist (Mike) at 2:51 PM