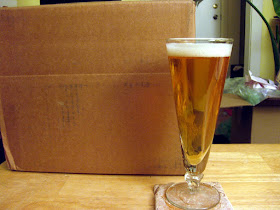 American saison has almost become a style in its own right. It shares many commonalities with the Belgian original, but the fermentation character tends to be cleaner and less idiosyncratic. There are certainly some oddball American versions, but few that have the more provincial and surprising flavors that Belgian brewers are known for. Visiting McKenzie's Brew House a year ago and sampling their Saison Vautour was a revelation for me in terms of American saison, that amazing combination of rye and funk with some other weird flavors that I couldn't place. Nathan and I just bottled our portion of the collaborative Irma Extra we brewed while visiting the brewery.

Inspired by head brewer Ryan and his assistant Gerard (who is about to open a new brewpub, Forest & Main, with several saisons planned) I brewed a rye saison with my friend Nate. We used the simple grist of 75% Pils and 25% rye malt, fermented with yeast and Brett from East Coast Yeast (as always Al's bug did not let me down). If you can't get your hands on ECY cultures, brew it anyway with the saison strain of your choice (McKenzie's uses White Labs Saison II) and Brett from a lab or harvested from bottle dregs.

Appearance – Brilliant burnt gold (love how Brett and time can clear a beer). Plenty of apparent carbonation streaming through, keeping the tight white head stay aloft. The rye really helped with lacing, what a beautiful beer!

Smell – The aroma has a complex blend of cereal (from the rye and Brett) and complex fruit (pear and apple) and spicy (pepper and coriander) aromatics from the yeasts. I wouldn't call it funky, but rustic is certainly right.

Taste – The flavor is much more Brett forward than the nose, with hay, leather, and overripe fruit. A well balanced beer, with the bready rye adding substance to the body without making it sweet. Some of the spice from the primary fermentation is still there, but it isn't as powerful as it was in the nose. There is a lingering minerally bitterness from the combination of hops and Brett. Probably the most authentic (read Fantôme) tasting saison I have made, thanks in large part to the bugs.

Mouthfeel – Solid carbonation, but not enough to make it foamy or sharp. The rye adds substance to the body without making the beer sweet. One of the tidbits I picked up from talking to the geyser of brewing information that is Chad Yakobson was that many saison strains produce more glycerol (which improves mouthfeel) than other brewer's yeast strains, which makes them especially good to pair with Brett (which does not produce glycerol in a significant quantity).

Drinkability & Notes – Really pleased with the results of this batch. There is not much I would change if I brewed it again, except getting some of the gravity from sugar (as we originally planned) to leave less for the Brett (to shift the balance just slightly towards the primary yeast character and away from the Brett).
The Mad Fermentationist (Mike) at 5:26 PM