Late in 2009 I "brewed" my fourth annual batch of cider, it was fermented with hefe weizen yeast plus a variety of souring microbes from the slurry of our first barrel aged beer.  Without the unfermentables of a beer I expected a light tartness at most, with more funk (I've noticed that Brett seems to be able to do its thing without much to work with, something lactic acid bacteria are unable to do).  There is some precedence for wild and funky ciders from Spain, although I've been underwhelmed by the few Basque ciders I've sampled (regrettably I didn't get the chance to try any more while I was in Madrid/Granada/Seville last week). 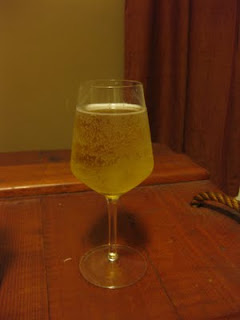 Appearance – Perfectly clear “cider” yellow (love that pectic enzyme). With a hard pour it is initially able to inflate a half inch head, which quickly recedes.

Smell – Some fresh tart apples, but more reminiscent of going to a pick-your-own orchard after half the apples have been knocked to the ground. There are aromas that are earthy, hay-like, yeasty, and toasty, really complex (but not wholly appetizing).

Taste – The flavor is more restrained than the nose, and only slightly tart. The apple flavor is mild, but cleaner and fresher than the aroma. There is some of that toasty/yeasty character in the finish, but it is at a level that adds complexity. The finish is dry, but not bone dry.

Mouthfeel – Prickly carbonation pierces through the light body. Certainly more carbonation than many ciders (especially the Basque version which are generally still to petillant), but not to the point of being Champagne-like

Drinkability & Notes – Worth the wait, it has really improved over its first five months in the bottle. Hopefully the aroma continue to evolve and mellow between now and the fall. I think this sour cider concept has some merit, but I would probably go with a milder strain of Brett like claussenii the next time I brew one. I might add some malto-dextrin as well to encourage the production of more acidity.
The Mad Fermentationist (Mike) at 10:03 PM