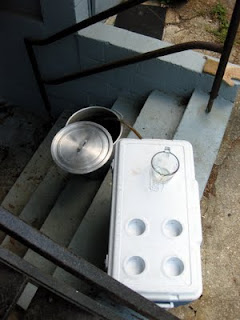 DC Homebrewers (now in its third year) quickly established a great meeting format, but we are still lacking activities outside of our monthly get-togethers.  After the success of the Smoked Stout brew day we had at my house last winter for the anniversary of the club, we decided to try something similar again this year.  This time around though the club decided to brew something a bit bigger and paler, an English barleywine.

Inspired by JW Lees Vintage Harvest Ale and Fuller's Vintage Ale which are each brewed with a single malt, our plan was to have Maris Otter comprise 100% of the grist for this batch.  Those English strong ales are darker and maltier than you might expect from just pale malt, so to replicate these characteristics we decided to borrow a trick from Hair of the Dog's Adam: boiling the wort down past the target volume and then topping off with water after the end of the boil.  The extended high-gravity boil concentrates the sugars and proteins which raises the boiling point of the wort and in turn causes the formation of additional melanoidins (these Maillard reaction products darken the beer and provide complex malty flavors).  When using this method you need to account for the lower efficiency caused by undercutting the amount of sparge water (we collected just 6.5 gallons of 1.084 wort).  Regrettably I only had 15.5 lbs of Maris Otter on hand and no one showed up with more, so we were forced to augment it with a few pounds of American Pale and German Munich.

Balance was provided by 1.75 ounces of homegrown hops that Sam and I contributed, combined with 2 ounces of commercial Styrian Goldings, all added with 80 minutes left in the boil.  The major problem with homegrown hops is that you don't know the percent of alpha acids they contain (which prevents the calculation of the IBUs they contribute), but for this beer we were willing to live with a bit more or less bitterness than my educated guess suggested.  This beer is primarily intended for aging so we skipped late boil hop additions since their aromatic character would have faded before the beer was ready to drink. 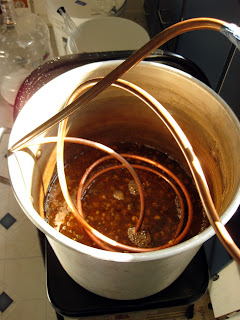 One other advantage of the concentrated boil method was that it allowed us to chill the top-off water before adding it to the partially cooled wort which helped bring it down below 70 F.  With the wort topped off we pitched one pack each of US-05 and S-04, both rehydrated in warm water for 15 minutes.  Rehydrating dried yeast is always a good idea, but it is an especially important step when brewing a high gravity beer (the osmotic pressure exerted by the high density of sugar would kill many of the dehydrated cells otherwise).  Ideally I would have used only English ale yeast, but I was more concerned about underpitching a 1.100 beer.

In a nod to the solera method we added half a bottle of last year's stout to the wort as well. We'll see if this turns into a tradition with future batches, but it was a good excuse to open up a bottle of the stout (which was drinking beautifully, with a muted smoke character that enhanced the charcoal character of the roasted grains).

It was a successful day of brewing (as well as eating braised pork and drinking homebrew) with my fellow DCHB members.  I was even talked into turning the second runnings into a low gravity lager, but more on that in a post next week.

No water adjustments. Mash was a few degrees cooler than I intended.

Collected 6.5 gallons with a batch sparge. Boiled down to ~3 gallons (not including the hops). HoTD method to boost mealanoidin production.

Chilled to ~85 F then added 2 gallons of chilled spring water to cool it the rest of the way. Rehydrated and pitched 1 pack each of US-05 and S-04 once the water was added to cool it to 65 F. Left at 66 F ambient to start fermenting.

Added ~12 oz of the 1st Anniversary Stout to give it a taste of Solera.

10/1/11 Bottled with a few grams of rehydrated Premiere Cuvee, and 3.5 oz corn sugar.  We blended the plain and grape portions back together after some taste tests.

11/29/12 Tasting notes are up, and while the beer isn't off other than being a bit too oaky, it doesn't have the complexity and depth of character that I expected in a strong ale. Next time I'd add some caramel malt, and maybe a hint of a dark malt.
The Mad Fermentationist (Mike) at 5:38 PM