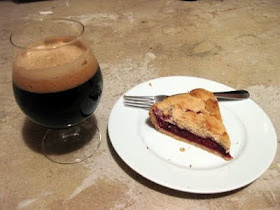 A strong dark beer isn't most people's ideal summer beverage, but tasting a dark sour seemed like a good excuse to drink down in my (now temperature controlled) barrel/bottle/fermentation room.  When I bought my house in 2009 I was hoping the basement would stay at a relatively moderate temperature during the summer, sadly now (well into my second summer here) I've come to accept that it needs a bit of help a few months of the year. So I installed a small A/C unit in the one window the room has.  I'll do a more complete post about it once I install additional insulation.

I posted a tasting of the straight version of our group's second bourbon barrel beer a month ago.  This portion of the batch sat on just under 1 lb of sour cherries per gallon for two months before bottling.  Audrey used the other bag of sour cherries I froze last summer to make a delicious cherry pie (great pairing).  I need to get down to the farmer's market before the sour cherries are gone for another year (or get serious and go to a pick-your-own orchard).

Appearance – Beautiful dark brown beer (the sad thing about adding cherries to a dark beer is that you don't see their color contribution). Pours with a two-finger tan head, which recedes slowly leaving some lacing behind.

Taste – The sour cherries have a slightly cooked, but mainly fresh character. The sourness is well balanced, tart, not sharp or aggressive. The bourbon barrel porter flavors comes through in the finish, mocha roast, with well integrated barrel character.  The funk is minimal, but I wouldn't call it clean, just restrained.

Drinkability & Notes – Couldn't be happier with the way this beer came out, the cherries lift the beer up adding complexity without getting in the way of the other flavors. Despite the heat the sourness keeps this drinkable. 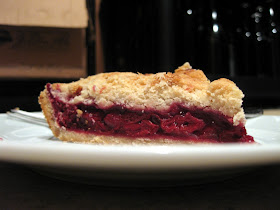 The Mad Fermentationist (Mike) at 8:02 PM