Brewing sour beer can get expensive with things like oak barrels, a second set of gear, and fruit. I think it is worth spending the extra money for anything that will improve the quality of the beer (especially when you consider how much top-shelf commercial sours can cost), but there are some areas where saving a few bucks doesn't mean sacrificing anything. One of those areas is maintaining your own microbial cultures, which not only saves money but also adds convenience and allows spontaneity when brewing sours.

Maintaining cultures is only something I would suggest if you brew sours regularly and know which strains have the right flavor contribution and fermentation characters for you. If you are just starting out brewing sour beers I’d suggest experimenting with different strains and seeing which ones work for your palate and brewing style before choosing which ones to maintain.

If you want to keep cultures on slants or streaked on agar plates that is an option. This method has never appealed to me because it takes special equipment (although not much) and time to build a culture back up to a pitchable quantity. If this is something you are interested in then I would suggest picking up a copy of Yeast by Jamil Zainasheff and Chris White. Even if you want to follow my “lazy” method, it might also be worth keeping plates so that you can start over with a known culture if the microbes in a starter die or mutate. 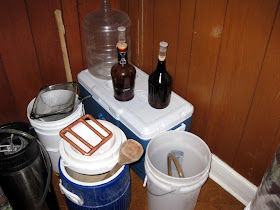 There are two options for keeping pitchable microbe starters on hand, you can either opt to propagate the individual strains separately or as a single mixed culture. Individual strains can be easier to maintain because each microbe has certain ideal conditions that may be at odds with another strain. Separate cultures also give you more flexibility if you want to make a beer with Brettanomyces, but not Lactobacillus (for example). Alternatively, maintaining a mixed “house” culture allows for more complexity because a huge variety of different strains can be maintained in a single vessel. There is no reason that you couldn't do both, or a hybrid method such as having a single culture with several strains of Brett, or both Lacto and Pedio.

I use growlers to store my cultures, although 750 ml bottles or one gallon glass jugs would work as well. No matter what vessel you select or what type of microbes you are growing make sure that you use a stopper and airlock to prevent oxygen and other microbes from getting into your culture.

I'm probably more lax with my sanitation then I should be, sanitizing the mouth of the fermenter (even flaming it as yeast ranchers do) would be the best process. You are afforded some protection compared to culturing brewer's yeast because the acid produced, high attenuation, and naturally funky character of the beers these cultures are used in will help to minimize the impact of any rogue strains.

I try to double the size of the cultures each time I feed them (something I picked up from keeping a sourdough starter). When I am ready to feed them I decant off enough of the spent wort so that when I double the volume I won’t risk the fermentation needing a blow off tube.

Brettanomyces – Brett is probably the easiest microbe to maintain because it is content slowly fermenting the complex dextrins in the wort. I feed my Brett B culture once every two months with ~1.030 wort (either malt extract or boiled down final runnings). I include 1/4 tsp of yeast nutrient (I like WYeast’s version) per quart. Once the starter wort is chilled add it and shake the culture to dissolve oxygen, which promote cell growth. I keep it at cool cellar temps to slow the growth.

Lactobacillus – Lacto likes simple sugars, so I use preservative free apple juice plus 1/4 tsp of yeast nutrient per quart. Apple juice comes pasteurized so it can be opened and added directly to the starter (although you could also dilute it up to 50%). Unlike yeast Lacto does not need oxygen to reproduce, but a small amount will not hurt it. I have read that some people decant their starters to avoid getting the malic acid from the juice into their beer, but the small amount has never caused a problem for me. Refrigerator temperatures are a good idea to slow their life cycle and keep them from dying between feedings. Adding some chalk can help to buffer against the lactic acid produced by the culture (Lacto doesn’t do well below pH ~3.8 per Vinnie).

Pediococcus – Haven't tried Pedio yet, but either malt or apple juice based starter with some yeast nutrients should work well for it. There is some debate over whether Pedio benefits from the presence of oxygen or not, although I think you are safest without since some sources say that it can produce acetic acid when given access to air. Your only real concern here is that, like Lactobacillus, it will produce a lot of lactic acid, so some chalk wouldn't be a bad idea (optimal pH for growth for P. damnosus is 5.0-5.5). I wouldn't worry if the culture smelled buttery since there is no Brett in there to clean up the diacetyl it produces.

Mixed Microbe Culture – A mixed culture should be kept in the refrigerator because the cold helps to retard the bacteria, preventing them from overwhelming the slower growing yeast. Starting with the slurry of a favorite batch is a good idea since you know how it is a good blend of microbes. Another is to keep an "everything" culture where you pitch in dregs from commercial and homebrew allowing the cultures that thrive to become dominant. Either way, I would still pitch fresh brewer’s yeast in addition to the culture to ensure a healthy primary fermentation.

For any type of culture it would be a good idea to feed it a few days before you want to use it just to make sure that the microbes are active before they are pitched. This is especially important if you are doing a 100% Brett fermentation or a similar technique where you are relying on the microbes to start fermenting quickly.

I asked Al Buck of East Coast Yeast for his opinion on this topic and it confirmed my feelings, "An easy thing to do is periodically decant off "old" starter media from the sediment and add fresh media w/ plenty of nutrients added - say every other month or so. Refrigerate afterwards until ready to use. What will happen over a couple of years is anyone's guess."

Both Al and Russian River have distributed cultures dried onto oak cubes/chips. This method allows for easier distribution of a culture, but they still need to be refreshed regularly. This method is a bit more time consuming since you’d need to start a fermentation from the chips, allow them to soak, and then dry on a rack every few months.

If you notice any issues with your cultures (no longer active, off flavor/aroma/appearance etc...) I would suggest dumping it and starting over from a fresh culture. The small cost of a new culture is dwarfed by the wasted money and effort of a poor batch.

Last summer I started a Berliner Weisse with my Lactobacillus starter. Coincidentally I just did an interview with James and Andy for Basic Brewing Radio on the style with some talk about keeping the culture going.
The Mad Fermentationist (Mike) at 9:29 PM