At nearly 11 months since brewing I'm a bit behind on the first tasting of my most recent Berliner Weisse.  This batch was brewed to a slightly higher gravity (1.045) than a traditional Berliner Weisse, but the half I'm tasting here was diluted to a more standard 1.033.  The stronger portion of the batch is still sitting in secondary with various microbes and some oak cubes.  This probably would have been the better post to link to my Berliner tasting/interview with BBR

Berliner Weisse is still an underserved style, even though it is pretty easy to brew compared to other sour styles.  My version has a bit more acidity and funk than most of the commercial versions I've sampled, but it has always gone over well at competitions (and more importantly I like it).  I'm hoping I have similar results in a few weeks at the 2011 NHC first round (I'm sending to Nashville, TN).  Is anybody else sending beers there? I'm entering categories 17a, 17b, 17e, 22b, 22c, and 23. 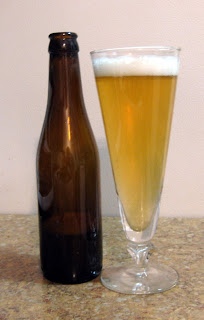 Appearance – The carbonation is strong enough that the bottle starts foaming up when I crack it open, not surprising with 3.6+ volumes of CO2. Pale (Budweiser) yellow with a slight haze even at cellar temps. The swirling bubbles keep the stark white head inflated.

Smell – Tart apples, slightly musty, and floral. A bit cleaner than my last Berliner, but still has plenty of aromatic complexity.

Taste – The acidity comes through as the dominant character on the first sip, tart up front and acidic in the finish. The wheaty/doughy malt comes across as a bit sweet despite how dry the beer is.

Mouthfeel – The high carbonation helps to prevent it from feeling too thin (not tannic or astringent), crisp is probably the right word.

Drinkability & Notes – Really drinkable if you like sour. I'm really happy with how this one turned out. I think Berliner Weisse is the first style that I've dialed to the point that there isn't anything I would change on my next batch.
The Mad Fermentationist (Mike) at 9:02 PM