A few years ago Sam Adams ran a commercial that said,"Hops are to beer what grapes are to wine."  well obviously that isn't true, but hops and beer are certainly synonyms.  That hasn't always been the case though, 500 years ago brewers added lots of other herbs and spices that provided counterpoint to the malt sweetness of beer.  One example of that practice was the people of Scotland, who harvested heather flowers (tips) to add to their beers.

My first attempt at a heather ale turned out well, with a nice balance despite the lack of hop bitterness.  I've been told that heather (especially the stems) can be boiled to extract some bitterness, but I decided to steep the flowers in hot water to just extract the aromatics.  The balance comes from some acidity provided by Lactobacillus and tannins from a small amount of oak cubes added to the primary fermentation.  I was hoping for a bit more lactic sourness, but hopefully that will come with more time in the bottle. 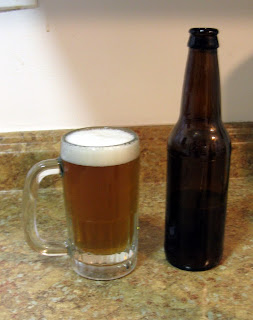 Appearance – Hazy pale-amber beer (looks the part of a historic ale, a bit darker than I expected for just Maris Otter and wheat malt). The head is white and has decent retention despite the lack of hops.

Smell – Floral, meadow, a bit yeasty. The heather aromatics are at about the right level for me, although I think it may improve as they soften and integrate into the aroma over the next few months.

Taste – The heather permeates the flavor mingling with the earthy yeastiness and grainy malt. The lactic acid provides a slight lemony tartness, but it really isn't sour at all. It has a great fresh quality to it that goes perfectly with spring. No bitterness, but it doesn't taste sweet or unbalanced.

Mouthfeel – Moderate body with a slight tannic roughness. The carbonation is medium-low, which goes well with the historic quality of the beer.

Drinkability & Notes – I tend to like gruits with a few years of age on them, but this one has a mellow enough herbal character that it is drinkable just a few weeks after bottling. A nice complex, weird session beer. It will be interesting to see how this one changes as it ages.
The Mad Fermentationist (Mike) at 8:21 PM