Adding Flowers to a Gruit 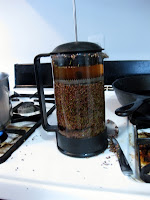 About a month ago I posted the recipe for the base gruit I brewed.  It was a simple recipe, unhopped (obviously) but also without any of the other botanicals you'd expect in a gruit.  I should say that I'm using gruit in the generic sense to mean a beer flavored with something besides hops, and not necessarily the classic combination of bog myrtle, yarrow, and wild rosemary. A few weeks later when the beer had fermented out and was ready to bottle I spent a few hours making teas by steeping the various flowers, as well as tasting, blending, and bottling. 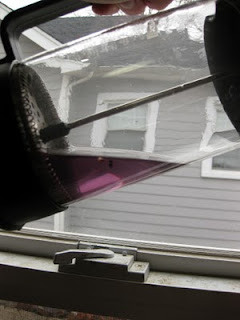 The base beer was alright on its own, but a bit bland.  The Lactobacillus didn't add as much sourness as I was hoping for (especially considering there weren't any hops to inhibit it), but it did add a touch of acidity that helped balance the residual malt sweetness.  Similarly I couldn't taste the oak, but I suspect the tannins it added helped cut through the malt.  The Scottish Heavy yeast strain was pretty clean, but it did leave some earthy/rustic character that really made the beer taste more "historic."

To make the flower teas I used my French press.  With its built in filter it was a good choice, although it was a bit small for the amount of heather I used.  For all of the floral teas I used filtered water right off the boil, with a steep time of about 5 minutes.  Boiling did not seem to extract more desirable compounds than steeping, but that may not hold true if you are using other botanicals (flowers tend to have more delicate aromatics than barks or roots). 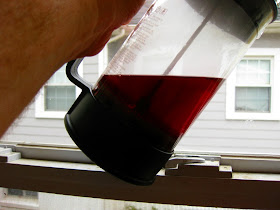 After smelling all of the teas I decided to pair heather with lavender for half of the batch.  Heather has a nice hay/meadow aroma and was used in many Scottish beers before hops displaced it.  The place I ordered from sells just the flowers (as opposed to the type sold at homebrew store that still has the stems attached).  It still took two ounces of heather steeped with enough water to extract 2.5 cups of tea.  Lavender is more potent (think potpourri or soap).  I had read that culinary lavender tends to have a more food friendly aroma, but I could only find English lavender (although that is one of the flowers Southampton uses in their excellent Cuvee des Fleurs).  I used just one tablespoon in half a cup of water, and then I only added two tablespoons of the resulting tea. 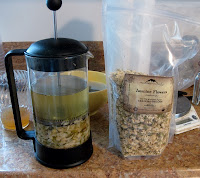 For the second half of the batch I wanted to do something a bit more unique. I decided to combine hibiscus and jasmine flowers. Hibiscus is a traditional flavoring in Mexican sweetened waters (agua de Jamaica) and can often be found in a local market.  It has a great fruity, tart, cranberry flavor and imparts a beautiful garnet color (Brasserie Dieu Du Ciel uses it to great effect in Rosée D'hibiscus).  Jasmine has a very delicate floral aroma that is most often used in teas (Avatar IPA from Elysian Brewing Company uses it as well).  I used one ounce of each of these flowers, steeped separately with enough water to get 1.5 cups of extract.

After testing measured amounts of each of the teas on samples of beer I scaled up the ratios.  At that point I only added about 2/3 of the projected amount, giving me room to taste and adjust the blend.  In the end I left the flavors of both blends a little short of the where I wanted, counting on the carbonation in the finished beer to boost the aromas.  If I had been more ambitious I could have used my carb cap to carbonate samples before bottling.  I think this was a great way to take some control using ingredients that were new to me (and that don't have a commonly used amount).  Later this week I'll post reviews for both halves of this batch.
The Mad Fermentationist (Mike) at 8:29 PM