After two weeks on three ounces of dry hops at room temperature, followed by another month on three additional ounces of keg hops my Pliny the Younger Clone is finally ready to drink.  I took a bit of a risk throwing a party before doing this tasting, but as luck would have it even a party full of 30 beer nerds wasn't able to go through a keg of 10.5% ABV beer (or the cask of the second runnings American Bitter).

The general assment from my friends who have tried the Russian River beer was that my attempt was pretty damn close.  My friend Dyan thought that mine was slightly sweeter than the original; I agree, but I'm not sure if that sweetness is from the residual unfermentables from the malt (1.094 to 1.014 is pretty dry), or whether it is an impression from the fruity hops.  I find the hop character of my version to be a bit more towads the fruit (citrus and strawberry) and not as heavy on the pine as the original.  I actually thought that the aroma of the DIPA I brewed a year ago was closer (both had Amarillo/Simcoe, but that one had Columbus instead of Centennial). 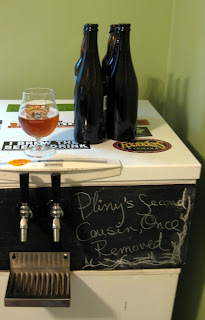 Smell – Danker than I remembered with both pine and citrus (grapefruit especially). There is a fruitiness that comes across almost as strawberry fruit roll-ups. A clean ethanol burn blends with the hop aromatics.

Mouthfeel – Medium-low carbonation, with a medium body.  The bitterness hangs around for a few minutes, certainly maxes out the IBU scale.  Thin enough to guarantee that it isn't an American Barleywine.

Drinkability & Notes – Drinkable for such a big beer, but it is still a big beer.  I'd actually prefer a bit lower gravity for a Double IPA, but this is a terrific beer.
The Mad Fermentationist (Mike) at 8:02 PM