Which brewing upgrade would you choose? 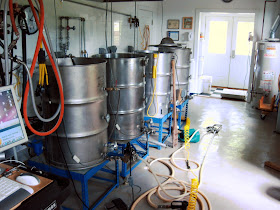 Just a bit of fun with this poll.  Not surprised that "Brew better beer" came out the winner (no one thinks that every batch they brew is perfect).

Time and space are obviously limitations for many brewers.  After spending the last 18 months living in a house after years in an apartment it is still a relief not to worry about where to store an extra case of beer (to make things even easier I'm planning to get an A/C unit and some insulation for my basement bottle/barrel room before the summer heat hits).  It is certainly nice not having to store fermenters or bottles at my parents' house 500 miles away like I was doing for awhile.

Finding time can be annoying sometimes (I know a lot of people have it worse than me), but I usually don't have much trouble blocking off a Saturday to brew every few weeks (it helps that I don't have a kid, dog, long commute, or many friends who aren't into hanging out while I brew).  I've also been brewing on the same basic system long enough that for most batches (not counting decoction or turbid mash etc...) I'm on autopilot and can get other stuff done during the mash/boil.

I'm still kicking around the idea of constructing a bigger system, but I brew too much beer as it is.  It would be fun to do split batches (sour half and leave half clean for example) or fill barrels easier.  I'm sure I'll make it there eventually.  The thing I like about five gallon batches is that I can still lift everything on my own and move it around to solve problems as needed.

Kegging/bottling certainly isn't my favorite activity, but it doesn't seem to bother me as much as some other people.  Obviously cheaper ingredients would be nice, but I'd rather brew better beer than cheaper beer (and honestly this is a pretty cheap hobby compared to a lot of others).

Post a comment with your reason for picking the option you did.  What ticks you off about bottling? How big do you wish your batches were?
The Mad Fermentationist (Mike) at 8:17 PM