Last summer I brewed an Oud Bruin that I soured half of pre-boil with a starter made from the microbes living on a handful of pale malt.  Most of the soured wort was boiled and then blended with the clean half that was already fermenting with a neutral ale yeast.  The resulting beer was fine, but not one of my favorite batches (after sitting on tap for a few months I took it off and added some blackberries and black raspberries and blended it with another traditionally souring batch).

Back in July when I was blending the soured and clean portions I ended up with an extra two quarts of the soured wort.  Not wanting to waste the "free" beer I racked it into a growler and pitched some of the White Labs Brett B starter I had on hand.  This wort was already quite sour, and it was unhopped, so I had no idea how it would turn out.  The other 100% Brett beers I've brewed were fermented with B. clausenii and B. anomalus (milder strains), and at most some of them had a hint of tartness from an addition of acid malt.

After a few months in primary I bottled the Brett B portion, but at that point the flavor wasn't great (a bit too funky with a strong worty flavor).  After a few months in the bottle though and the flavor really turned around, with a solid acidity, lots of cherry funk, and just a bit of that grainy flavor (maybe a longer boil would have helped?).  This combination of souring the wort pre-boil and doing a 100% Brett fermentation seems like a legitimate way to turn out a relatively "authentic" tasting sour beer in less than half the time it takes to do the souring and funking simultaneously.  I'll certainly be giving a full batch done with way a shot sometime soon (once I get a few other experiments out of the way). 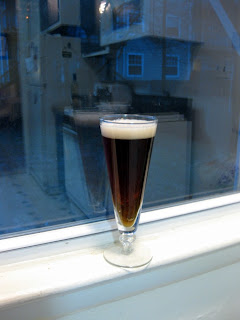 Appearance – Nearly crystal-clear amberish brown body with a moderate white head. The foam retention is alright, but it doesn't leave much lacing.

Smell – Funky tart cherry aroma, with good intensity. It has more grain/toast character than most “standard” sour beers I've brewed, fresher flavor. There is just a hint of vinegar in the aroma as it warms.

Taste – The lactic acidity isn't aggressive but it seems to coat the entire surface of my mouth. There is some sweetness, but nothing like a sweet and sour Flemish Red. The balance most reminds me of Ithaca Brute, although their production method (acid malt for sourness, Brett in the barrel) is much different.

Mouthfeel – Still has a bit of body, but there is a lingering tannic roughness on the tongue. The medium-high carbonation works well with this beer helping to lift the sweetness.

Drinkability & Notes – A pleasant beer that has gone over well with the people who have sampled it. Turned out great for an experiment, worth a repeat with a lower mash temp and a longer boil.
The Mad Fermentationist (Mike) at 9:20 AM