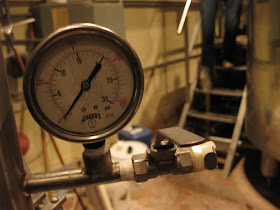 Southampton Publick House (their brewer literally wrote the book on the style)? Upright or Stillwater, since they focus on saisons?  Maybe one of the breweries with the best ratings: Ommegang (Hennepin), Boulevard (Saison Brett), or The Bruery (Saison de Lente, and Saison Rue)?  I bet not many of you said McKenzie's Brew House despite the fact that their Saison Vautour has won three of the last four GABF golds for the style (I'm not a huge believer in competitions, but 3 out of 4 is saying something). It's interesting how beer hype/publicity works sometimes.

Ryan Michaels, the head brewer at both McKenzie's locations, was gracious enough to let Nathan and I kick around some ideas with him and then join him and Gerard, (the long term assistant brewer) at the Malvern PA location to brew a darker take on saison. I think part of the reason that their beers don't receive the publicity they deserve is that some beer nerds stopped paying attention to Mckenzie's a few years ago when their previous brewer Scott "The Dude" Morrison left.  Another contributor to their sleeper status is that McKenzie's doesn't announce bottle release days, they just quietly put batches up for sale at the pubs as they are ready. 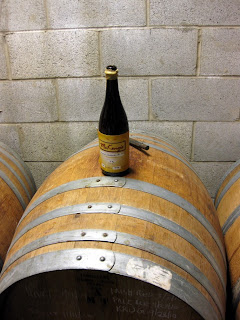 Their process has slowly developed into something a bit different from the standard saison brewing procedure.  The recipe for Saison Vautour is fairly simple: mostly pils, with some rye malt for rustic character, and sugar to ensure high attenuation with White Labs Saison II.  In 2007, the first year they won gold, the beer was clean (just Saccharomyces) and fermented in stainless.  That version is one of their house beers, dry, big pepper, bright, easy to drink.  The 2009 win was for the same beer with an accidental dose of Brett in the bottle (they now only bottle funky/sour beers).  The 2010 version was started in stainless for a few days then pumped into barrels where the resident microbes went to work.  The bottle of the barrel aged version we sampled was hard to call a saison, since it had a nice sourness, big farmyard funk (think Fantome on a good day), and loads of complexity (thankfully the judges at GABF are given more license to select the best beer than BJCP judges have).

McKenzie's sour barrel program isn't too much different from our own.  They add the dregs from good sour beers they drink, and the bugs are further disseminated by a thief carrying them from one barrel to the next (like a bee exchanging pollen at each flower it visits).  Ryan even paid me the compliment of dumping the dregs from a bottle of Funky Dark Saison into one of his barrels (yes I realize how nerdy it is that I'm excited to see the sludge from one of my bottles going into a barrel). 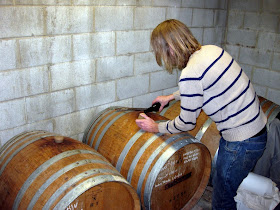 We got a chance to try a good number of their beers while we were at the brewery, and from bottles we took home.  Their Biere de Garde was one of the best I've had, they add a small amount of black pepper added to simulate the flavor of being boiled in a copper kettle (an idea stolen from Tom Baker).  Their sours have a style all their own, with beers like a soured Baltic Poter (Oer Faute), a tart low alcohol Grissette (Grissette), and Tristessa probably the best funky/hoppy beer I've tried (they couldn't get the hop sock out of the barrel so it has stayed in there for a few more beers).  They age in a combination of used French oak from a local winery and American oak spirit barrels (we purchased one of their used Laird's apple brandy barrels while we were up there).

The beer we helped to brew was a brown saison. Most of the color came from dark candi syrup with some Munich and CaraMunich for added maltiness and dark fruit respectively.  We were aiming for a slightly higher gravity, but the efficiency tanked (for unknown reasons) and we ended up adding some extra candi sugar to the boil to get back up to a respectable level.  For hops, just a small bittering dose of Goldings near the start of the boil.

Ryan pumped the yeast into the tank where it mixed with the beer as it exited the heat exchanger in the low-60s.  After the beer fermented for two days, half of it was moved into two wine barrels and a second-use apple brandy barrel.  Each barrels will be fed with either honey (wildflower, buckwheat) or jaggery (Indian palm sugar) as they continue to slowly ferment.  When the beer is ready Nathan and I are planning to go back to assist with blending/bottling.  The plan for that isn't set; the clean beer might be served on tap, the barrels could be bottled separately, or blended together depending on how they taste.

Nathan and I brought along a carboy and took home 5 gallons of the pitched wort.  We used the yeast cake and 2 gallons of the beer as a starter for our Golden Apple Brandy Solera, but that will have to be another post.

Our 5 gallons of wort received the dregs from a few McKenzie's beers we drank.

1/23/11 Racked 3 gallons to secondary (3 gallon glass carboy), the other 2 gallons and the yeast cake into the apple brandy barrel beer.  Still tastes clean, nice peppery character from the yeast.

1/25/11 Good timing on this post, I just heard that the clean version is on tap at McKenzie's!

10/15/11  Blended some, bottled the remaining 2 gallons with 1.5 oz of cane sugar. Has some oak character despite not having had any added.